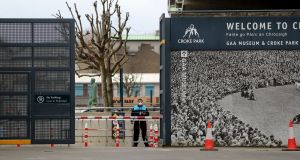 The GAA have said the 2020 All-Ireland Championships won’t start until July at the earliest. Photograph: Bryan Keane/Inpho

The GAA has accepted that there will be no championship action this year until July at the earliest but in reality until further notice.

In a statement released on Tuesday evening, the association said that it was acknowledging last weekend’s renewal of Government restrictions until May 5th, “its impact on the scheduling of sporting events and working practices and has factored the extension of the arrangements into its contingency planning.”

It will come as no surprise that the GAA has made public its stance. Speaking on RTE, director of communications Alan Milton said that rather than publicise new plans in response to every government announcement, the association would wait until there was clarity on any possible resumption.

Club activity remains suspended until at least 5th May.

The statement went on to say: “The senior inter-county championships, scheduled to begin in May, will be postponed until further clarity on the current situation is available.

“However, it is the association’s view that it is highly unlikely these will be rescheduled any time before the beginning of July, at the earliest.

“When sporting activity recommences, the GAA will accommodate both club and county games. The association also intends to complete the Allianz Leagues, or at least those games that have a bearing on next year’s divisions, where possible.”

Previously, the GAA had said that should activity be able to resume by mid-June, the championships could be completed on schedule but that had always been a remote possibility and has now been ruled out as impossible.

This Friday, a remote special congress has been organised for the purpose of empowering Croke Park’s management committee to take quick decisions on championship formats should the season get the go-ahead.

That likelihood has begun to look more unlikely in recent days with various medical experts and epidemiologists expressing doubt that mass-attendance sporting events could take place again this year.

Both Minister for Health Simon Harris TD and Chief Medical Officer Tony Holohan made the same point on Monday when saying that social distancing would have to stay in place until a vaccine was available.

Although a team in Oxford University is of the view that this might happen as soon as September, others are less optimistic.

Milton said that the association would hope for the best for as early a resumption as possible.

In keeping with the GAA policy, the statement said, ‘all of our decisions will be based on the advice of the medical professionals and the government’.