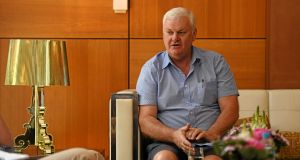 As he heads into the last few months of his presidency Aogán Ó Fearghail leaves the future landscape of the GAA barely recognisable from three years ago when he took office.

Next summer will accommodate the most radical changes ever seen in the senior inter-county championships: more matches played in a condensed calendar and round-robin formats in the provincial hurling championships and the All-Ireland football quarter-finals.

As an insistent advocate of the changes the president says he is confident rather than watchful, as the three-year experiment gets under way.

“I believe they’ll work,” he tells a media briefing in Perth, where he will attend the second international rules test on Saturday. “I wouldn’t have agreed with even trying to implement change if I though it wouldn’t work. We consulted widely and listened to central council. There’s little point in having expert committees whether they’re finance committees or hurling development committees if you don’t listen to them.

Not everything has happened as he would have wanted. In football, Ó Fearghail is a supporter of a graded championship for Division Four counties who lose their first provincial fixture. This was adopted by the GAA in 2007 and ’08 but under protests from the affected counties the status quo was reinstated and only last year congress had to drop a proposal to introduce something similar because of the continuing opposition of the same units.

“It’s one part of the jigsaw I admit I wouldn’t be fully comfortable with,” he says about the All-Ireland qualifiers. “I believe if you’re in Division Four in football, you have been for a number of years and you have a record of losing your first round championship match, you should go into a separate competition.

“I think you should play for Sam Maguire in your first game but if you’re beaten in that, you should enter a meaningful competition. We did argue that and those counties felt they didn’t want that. It was discussed at central council and counties not involved felt, ‘maybe not’. I can’t crystal-ball gaze but in future I think there’ll be a return to a two-tier championship.”

In hurling, there is a case building for the under-21 hurling championship to reduce to under-20 and keep it in line with football, but although Tipperary proposed it, other main hurling counties – a term the president dislikes, believing they are all GAA counties – have yet to be convinced.

Does he agree with Tipperary in respect of this?

“Absolutely. No doubt. Hurling needs to go to under-20 and I can’t see any argument against it. Tipperary wanted that to happen and they were right but they didn’t win the day. I accept democracy – I can’t accept it just when things go your way – but I believe that it should happen and the logic stacks up that way.”

He is less dogmatic about whether, like football, it should be a developmental grade in which players aren’t allowed simultaneously be available for senior panels.

“Hurling is always a little bit different and I would bow to the expertise of our hurling development committee on that. They are not fully convinced that it should be the exact same in football and I would await their expert view on that.”

Of course, the principal reason behind the calendar changes is to increase by 50 per cent the number of weekends available for club activity. He called on clubs to make sure that the additional calendar slots are used for their purposes rather than the county team.

“We’ve made the changes and the freedom is now there for clubs to take the initiative and ensure that they follow the direction laid out. If this doesn’t happen it’s up to the clubs to take action.”

He’s happy with the Australia situation at present. The GAA are getting along with the AFL and the series, if not quite in rosy-cheeked bloom, is in better health than for a while. Ó Fearghail says that their partners are “committed to it” and that, of major importance from his point of view, the Gaelic clubs in Australia see it as “exciting,” a way of promoting themselves.

There is talk of a test match in Philadelphia next year, with the other presumably in Dublin, to which the president extends a cautious welcome. “It’s not definite but there’s a good possibility. We’d be happy with that. Not for the two games of the series but for one of them.”

He is speaking in a week when Ireland’s rugby world cup bid for 2023 went down in flames. By offering their facilities to enable the project, the GAA were closely involved. The failure means that apart from the €30 million that went into Páirc Uí Chaoimh, public funding geared towards the RWC will not now be drawn down.

Asked about the criticism by former Meath player and pundit Colm O’Rourke of the salaries paid to employees of the Gaelic Players’ Association, Ó Feargahil pointed out that there was a 25 per cent cap on how much of the money allocated by the GAA to the GPA could be spent on salaries.

Finally, he reflected on what he believes will be the positive impact of the new calendar and, in a way, a sign-off of the advancement made during his presidency.

“We wanted to make sure clubs had more space to play games. I’ve four players at home and that’s all they want, is to play games and know when they’re playing.

“We’ve more playing than ever, more people participating, and our relevance was never stronger in Ireland and increasingly around the world.”

1 Diego Maradona dies of heart attack, aged 60
2 Keith Duggan: Through the glories and the disgraces, we were all Maradona addicts
3 Andy Farrell to delve deeper into Irish squad for team to play Georgia
4 Darragh Ó Sé: Cork and Donegal went out with the wrong attitude
5 Handful of God: Five magic Maradona moments
Real news has value SUBSCRIBE