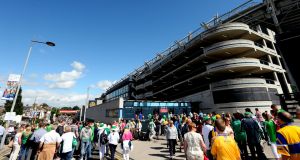 GAA director general Tom Ryan estimates the potential cost of losing the championship as in the region of €60 million. Photograph: James Crombie/Inpho

The GAA meets by remote special congress on Friday against a backdrop of huge financial uncertainty for the association. Intensifying concerns over whether a championship can take place given doubts about the lifting of social restrictions mean that virtually all of the revenues for 2020 are in doubt.

Director general Tom Ryan estimated the potential cost of losing the championship as in the region of €60 million, which is nearly the entire revenue of €73 million for last year.

Some of the money for 2020 has been taken in, as there was activity for the first two months but the bulk of the GAA’s earnings are generated during the summer high season. As the association distributes at least 80 per cent of its revenues (in 2019 it was 84 per cent) back to county and club units, it doesn’t have large cash reserves.

Last year’s gate receipts came in at €36 million, the vast majority of which (€29 million) came from championship fixtures. The leagues generated €5.5 million but this year’s would be down on that with neither the finals nor the perennially attractive last day of the football league played to date.

Although there is no exposure on the GAA’s season tickets, which specifically rule out refunds for cancellations beyond the association’s control, the impact wouldn’t have been enormous with just two rounds left in the football plus any knockout rounds. Counties will honour the commitment for a first-round championship ticket and any subsequent rounds, if and when that takes place.

Closely linked to this is broadcasting revenue and if the primary league broadcasters TG4 and Eir Sport had largely completed their packages, the former has missed out on the final stages of the competition and later in the year, the under-20 hurling championship.

RTÉ and Sky, the championship partners are facing in a best-case scenario a much reduced programme of events. Last year’s media income was €14 million and whereas there can be some mitigation with access to archives, it’s certain that broadcasters will be negotiating refunds by the end of the year.

Sponsorship is also in limbo with the nearly €5 million largely centred on the championship activity. So far sponsors are said to be sympathetic to the difficulties facing the GAA but again, in the absence of any activities they can’t be expected to hand over the full amounts.

Sources in Croke Park acknowledge that it would be hard for any sponsor to maintain a commercial partnership with the GAA in the absence of championship fixtures and possibly in circumstances requiring them to cut jobs in their own business.

Other commercial revenue streams include Croke Park, which disbursed a dividend of €10.5 million last year. Conference business is said to be happy enough to postpone bookings affected by the pandemic but match-related income is dependent on the season re-starting.

There is increasing pessimism that the restrictions preventing championship activity will ease anytime soon. The later the likely start of fixtures, the less extensive the programme of matches possible, with knockout format almost certain to replace the current structure.

Within the GAA hierarchy, there is little enthusiasm for matches being played behind closed door, partly because of the significant role played by gate receipts in revenue but also because championship spectators are seen as much a part of the occasion as the teams.

There are other views of this, such as the opportunity to recoup some revenue from broadcast partners if mass-spectator attendances remain impossible but as was pointed out by more than one source, such a departure would involve jeopardising players who would be unable to observe social distancing on the field or in dressingrooms.

Friday’s special congress, contrary to some hopes, will not be shedding any light on any potential championship schedules. The GAA released the clár on Thursday, outlining the reduced numbers of delegates – 67 or about a quarter of the number that attended February’s annual congress.

It will take place in the afternoon and consider just two motions. Firstly, there is the proposal to give the special congress the power to override the rule 3.38 that says no special congress held within a year of an annual congress can overturn any of the latter’s decisions.

The second motion simply states the main proposal that the GAA’s Management Committee be given the power to declare that ‘special emergency circumstances exist’ making it ‘impracticable’ to conduct association business.

This is intended to allow management to take swift decisions on matters of governance and games administration, specifically the organising of a modified championship whenever public health regulations allow.

Under the provision, the declared emergency will not last longer than 12 weeks without Central Council approval but management can renew the declaration at eight-week intervals, again with the approval of Central Council, which reserves the power to annul it.

In the current emergency, the new rule, if adopted, will declare an emergency until July 10th, which may be rolled over until September 5th. If no clarity has emerged by then concerning any fixtures window, the assumption would have to be that the championship will not take place in 2020.