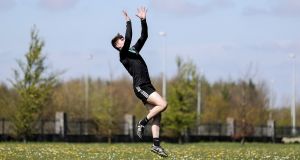 Conor Flannery of Round Tower GAA trains at Corkagh Park in Dublin during the lockdown. Photograph: Laszlo Geczo/Inpho

Described as the largest of its kind in the history of Irish sport, a new coaching survey has been launched to help set out the future development of Gaelic games.

The online survey will for the first time also bring in the entire Gaelic games community - with coaches across every level of football, hurling, camogie, handball and rounders encouraged and urged to make their voices heard.

“It is very vast, and to my knowledge has never been done before by a single governing body of sport,” says Dr Peter Horgan, the GAA’s Education Officer and head of the nine-person survey advisory group.

“We’ve been knocking this around for the last 18 months, and thought with the suspension of activities now this was an apt time to start it up. We set up the advisory group, five weeks ago, have done a few pilots, and were in a position to release the survey fully this morning (Tuesday).

“What we’re trying to gather is broad-based population data on all our coaches, at all levels, from those working work nursery kids all the way up to inter-county level, across any of our codes. It’s also another example of how we’re trying to align ourselves closer to women’s Gaelic football and camagie.

Dr Horgan also told The Irish Times about the wider aims of the survey: “We already suspect, or know, that coaches are usually involved with multiple teams, with sometimes multiple codes, say hurling and football, or football and camogie.

“From coach education, we also want to know more about learning needs for the future. And on a related issue we want to hear from those coaches who are maybe not active anymore, to try to figure out what that is. And what we can do to ameliorate those reasons.”

The survey should take no more than 15 minutes to complete, and is completely anonymous, and confidential, so that, “coaches can be as honest as possible. This is important as it will allow us to build a really accurate profile of coaching across Gaelic games.”

Despite its vast scale, the results should be specific and telling: “What we aim to do then, we can look at all hurling coaches, or football coaches, say in Galway for example. We’ve committed to a number of different reports, one for every county, each province, and across the entire response rate.

“There is an awful lot of work in it, but it’s not a short term project, we intend to keep the first phase open for three to five weeks or so, and build on that with a second phase in a focus group. But I’d hope we can see initial results by the end of September. We opened it this morning, and had over 700 responses in the first three hours. We’re targeting 10,000 responses, but across all counties, and Europe, the US and North America, we should well surpass that.

“Games development is an involving thing anyway, and this is all about better supporting the jobs they do, and if one thing has been recognised since the suspension has come in, it’s that coaches do a very important job. And hopefully that will be reflected even more as we get back to play.”

The GAA survey can be found HERE

1 In turmoil on and off the pitch: Where did it all go wrong for Barcelona?
2 Rugby impasse continues as no deal reached in fourth round of IRFU salary talks
3 Martina Navratilova: A leader in her time, and for ours
4 Aubameyang double puts him level with Vardy in race for Golden Boot
5 Joanne O’Riordan: Money and global pandemics won’t break Michelle Finn’s stride
Real news has value SUBSCRIBE