GAA happy to play the long game and observe others 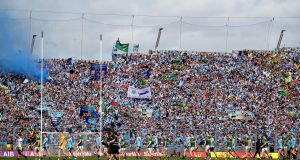 The GAA confirmed on Wednesday that no intercounty action is likely to take place until October at the earliest. Photo: Ryan Byrne/Inpho

The committee established by the GAA to advise on return-to play protocols after the Covid-19 lockdown, is expected to file its first report quite quickly. This emerged after Wednesday’s response by the association to last Friday’s Government plan for exiting the pandemic restrictions.

Chaired by Shay Bannon, who also chairs the association’s standing committee on Health and Safety, the committee’s initial remit will be threefold: what is required for the GAA to sanction a return to training, then a return to play and also for its venues to be opened and used.

Although it is set out in diplomatic terms and expresses the hope that club and county competitions can take place this year, Wednesday’s statement firmly pushes back against the suggestion last week by Taoiseach Leo Varadkar that All-Irelands could be played as early as August or September.

There will be no intercounty activity before October at the earliest, a conclusion that was obvious even last week when reading between the lines of the ongoing requirement for social distancing in the Government blueprint – a point made in the statement, which says that the association will be seeking clarification of “the challenge of social distancing in contact sport”.

That will impact on the return of club activity, which it has been stated will precede any resumption of intercounty fixtures.

Of equal significance is the declaration for the first time that staging matches behind closed doors is unlikely to happen. This was the condition on which the Taoiseach envisaged the All-Ireland’s taking place.

Whereas there isn’t an outright rejection of the idea in that it isn’t “categorically” ruled out, the statement notes that, “there appears to be a lack of appetite” for the idea, which has been backed by a number of county players and managers on the grounds that it would better than nothing.

Of further interest to county panels is the request “to suspend all inter-county training until further notice. There will be a phased resumption of training at both club and county level to allow players to prepare appropriately for playing games.”

As a further prompt, units are reminded that the Player Injury scheme is suspended at present pending the announcement of return to play protocols.

All of these positions were evident in GAA president John Horan’s radio interview last week when he questioned the advisability of any activities taking place while social distancing continues to be recommended.

“Our players are amateur athletes,” he told Seán O’Rourke on RTE Radio, “and they go back to their families and workplace and we can’t put them or anyone they come into contact with, at risk just for the sake of playing games. We won’t be making any rushed decision on this.”

The ideas were thrashed out by members of the Management Committee, to whom special powers were recently granted, and discussed with county chairs in a tele-meeting on Wednesday.

The county officers were invited to give their views initially and it is believed that there was no significant differences of opinion expressed.

What emerged is in keeping with the widespread view within the association that health and safety concerns should be paramount in any return to action.

Croke Park sources also make the point that the GAA is in no hurry about this. Although its finances are extremely undermined by the cessation of all fixtures, it doesn’t have the operational pressure of having to pay players and can wait to monitor how other sports manage their resumption of on-field activities and any lessons that arise.

“Even if we’re just two weeks behind,” was the view, “we can learn from others’ experiences.”

Clubs have also been instructed to remain closed until 20th July, which rules out their being available for general recreation activity.

The special committee, formed to guide the association in the weeks to come, features a number of heavy hitters from the world of medicine and general administration.

Dick Clerkin, who chairs the Medical Scientific and Welfare Committee is another appointment but other appointments reflect different areas of expertise, such as that of Croke Park events and safety manager Tony McGuinness to advise on any proposed opening of venues and Stephen McGeehan, Ulster Head of Operations, to liaise on any jurisdictional issues that arise in Northern Ireland.