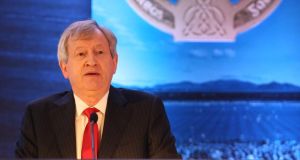 GAA director general Páraic Duffy has questioned whether the association should continue to make so many of its matches available for live broadcast.

His comments came at the end of a robust defence of the association’s allocation of broadcasting rights to Sky Sports. Speaking at the opening session of this year’s annual congress in the Slieve Russell Hotel in Ballyconnell, Cavan, Duffy said that the only criterion applied by the association’s management committee was: “What is best for the GAA?”

He concluded his comments however by asking whether there were now too many matches being televised at a time when attendances at matches were suffering. It was , he suggested, a more important issue than the Sky deal.

“Is broadcast policy impacting on attendances and club games? We’re showing two live games every Sunday throughout the summer.

“The experience in other sports is that as TV gets better and better the idea of watching games at home becomes more and more attractive. The question becomes ‘will I go to the match, travel to the venue and buy tickets when I can sit down and watch two games on television?’

“We need to preserve the atmosphere in our grounds by continuing to attract crowds. We need live TV coverage but is the balance correct at the moment? We need to invest in infrastructure and facilities and over the next year we need to discuss this.

He also questioned whether the GAA was maximising the revenue from this source.

“We need the income from our television rights but the average per game in the recent (English) Premier League soccer deal is £11,000,000 – more or less our entire total.”

The remarks came when he was responding to the debate on his annual report during which the Sky deal attracted only a few comments.

Lancashire secretary Fergal Kiernan reiterated his views as expressed in this newspaper yesterday, saying that “feedback has been very positive”.

Dublin CEO John Costello said the deal would be reviewed at the end of its three years. Duffy responded by asking delegates how the GAA had been affected by the broadcasting deal.

“After one year is the GAA worse off? We still have 100 games available free to air. The quality is better than ever and I believe that’s linked to the fact of the Sky deal. There’s a growing interest in the games in Britain.”

Former president Seán Kelly praised the section in Duffy’s report on stadium infrastructure, which said that hard decisions would have to be made in relation to prioritising venues. Kelly called for all major venues to be occasionally allocated a high-profile match, such as last year’s Kerry-Mayo All-Ireland semi-final replay, which was played in Limerick.

Earlier it had been announced that Wexford hurler Andrew Shore had been cleared to play football and hurling this year after his 48-week ban for playing with a the Birmingham club Roger Casements in Britain when registered with in Ireland with Dublin club Parnells was lifted.

The remainder of the suspension – half of which has been served since its imposition by the Warwickshire county board in November -–was rescinded by the GAA’s reinstatement committee at congress.

Shore, formerly of Davidstown-Courtnacuddy, will now be free to rejoin Liam Dunne’s Wexford hurling panel for the rest of the season.