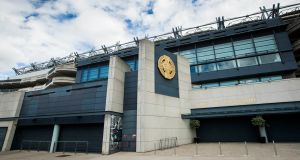 The GAA’s upbeat announcement of its Covid-19 Advisory Group’s Safe Return to Gaelic Games document is quite specific on the dates it envisages return to play but in what has been a fast moving few weeks, the association acknowledges that other elements are still under consideration.

There was also acknowledgement that events had overtaken them to an extent with the Government’s own roadmap moving ahead more quickly than anticipated – for instance the 20km travel limit has been changed to ‘within your county’.

If the headline recommendations are for club matches to return on July 31st and the provincial and All-Ireland championships on October 17th – at the earliest – the jury is still out on the attendances that are likely to be accommodated.

Asked about the prospect of championship fixtures with much reduced crowds or even behind closed doors, GAA president John Horan replied: “It would be our hope to have attendances at games. It may mean we use restricted venues for the intercounty championships. It’s something we’re conscious of and we see it as desirable to have crowds at a game. Obviously, I don’t think they’ll ever be at the number or level they were at, they will be restricted, but that restriction will take into account all the health measures and guidance we’re given.”

GAA director general Tom Ryan added: “Games behind closed doors is not really something that we want.”

As with everything, the matter will be dictated by public health advice.

It is possible to envisage some friction in two areas: one, the reopening of the walking tracks in clubs will be the only easing of restrictions, which means that in high summer, playing fields will still be off limits.

Secondly the stipulation that county teams can return to training only in mid-September was acknowledged as difficult by Feargal McGill, the GAA’s head of games administration and a member of advisory group.

“I think it’s practical. I don’t expect managers to be happy, far from it, but that’s a very different thing to whether it is practical or not.”

Horan reiterated his view that an overrun of the All-Ireland championships into 2021 would be acceptable but only as far as February.

There also appeared to be a stepping back from regarding social distancing as an insurmountable barrier to resuming the games.

Although Dr Kevin Moran of the advisory group stated categorically that there could be no return to full training were two metres still the standard for social distancing. He qualified this by saying that he hoped players could “progress” to contact training.

“All the indications are that over the next few weeks,” he said, “is that the situation will settle. If we look at the way the pandemic has evolved in Europe and here at home, the pandemic has been brought into control in most parts of Europe. The second wave that everyone was worried about has not happened but may well yet happen and there is no place for complacency.

“The studies we have looked at internationally will also suggest that the virus is weakening . . . but there are no absolute guarantees about anything. This is a fluid situation, it is still evolving.”

Asked later about the dangers of ‘high ventilating exchange’ between players, Dr Moran was again reassuring.

“The WHO [World Health Organisation] state you have to be sitting one metre apart from somebody for 15 minutes to inhale sufficient quantities of the virus. We’ve reviewed all the epidemiological studies that are available internationally and looked at the information from international sporting organisations, and the information is that outdoor training is associated with minimal risk.”

McGill spelled it out in terms of the Government roadmap which envisaged a return to contact sport while social distancing still applied.

“They might decide that social distancing remains in place, but for the good of the country, the mental health of people, they are treating sport differently. That’s what’s implied in the Government roadmap.”

It was nonetheless emphasised that players would be free “to opt in or opt out” depending on their circumstances. Ryan said that intercounty players had been consulted through the Gaelic Players Association and informally and he was confident that their views had been represented.

It remains to be seen how the roadmap is greeted by club players, more than 40 per cent of whom said in a survey by the Club Players Association that they wouldn’t be happy to return without a vaccine being available.

The protocols for clubs reopening for training from June 29th, phase four, are detailed with filling questionnaires and temperature checks required before players can participate.

The roadmap is an all-Ireland one and drawn up in conjunction with the women’s sports. There will be a further announcement next week concerning details of the Cúl Camps, the popular juvenile activity programme, which are expected to return in a modified format.

It was also stated that Professor Mary Horgan of UCC had been added to the advisory group, which met on four occasions from May 11th.