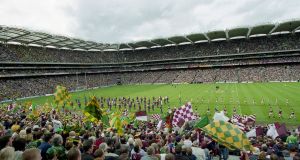 Croke Park: There will be a commemoration on the centenary of Bloody Sunday, November 21st, which falls on a Saturday. Photograph: Andrew Paton/Inpho

The GAA brought business back to Croke Park on Friday morning to unveil to media the structure for the planned, truncated intercounty season due to run from mid-October all the way up until a few days before Christmas.

Reporters, many of whose most recent outdoor marking was at the same venue for last February’s annual congress – the same weekend as Ireland’s first coronavirus case – sat suitably distanced in the Cusack Suite awaiting further details of what is hoped to be the 2020 championship.

The tightness of the outlined schedules and the fact that the flag won’t go up for another 17 weeks contributed to a sense of restraint in the contributions of the three senior officials, President John Horan, DG Tom Ryan and Head of Games Administration Feargal McGill, who made the presentation on how the 2020 championship might look.

McGill explained that there was still “a job of work” to be done to get the proposed timetable up and running and said that it had to be seen “in the context of Covid-19” and “a club window that extends to October 11th”. Its compressed nature, he said was because the schedule “was not just about 2020” but to protect as far as possible the 2021 season.

There was no doubt that the old adage had been turned on its head and that the GAA will find it considerably better to arrive than to travel hopefully through the next four months.

Many of the intriguing details of how things might work out have been parked pending developments in the weeks ahead such as venues and even what counties might be involved.

Given the public health suggestions that any resurgence of Covid-19 may lead to localised lockdowns, the prospect of counties having to be omitted from the championship could conceivably arise – it’s not generally remembered but the 1941 All-Ireland hurling championship had to go ahead without both Kilkenny and Tipperary because of the scale of the foot and mouth outbreak in the counties.

“We will be drawing up protocols for all that,” said McGill. “It was discussed again at our Covid group meeting last night [Thursday]. It will require protocols to be in place as part of our competition regulations but I don’t want to speculate on that as it sounds very negative.

“We will come in due course with protocols. We have been very careful not to plan too far in advance.”

That lack of certainty extends most obviously to venues for the championship. Aside from pandemic, one of the most obvious influences on tight schedules is weather and in this case at a time of the year when the elements can be uncooperative.

Cork Park has a surface that is virtually bullet-proof with undersoil heating and a drainage system that survived a monsoon during the 2008 All-Ireland football quarter-finals but not all matches can be played there. On the upside of the known ‘unknowns’ in the future is the possibility that restrictions may be lifted in order to allow bigger crowds than the current protocols would admit.

DG Tom Ryan estimated that even reducing social distancing from two metres to one would only green-light an attendance of little more than 30,000 in Croke Park, as opposed to around 25,000. Any increase on that would be very welcome.

On the subject of revenues, Ryan was philosophical about the reduction in crowds.

There are winners and losers in the improvised calendar. New York, as expected, have been excluded in the very year that one of their own, Larry McCarthy, became president-elect. The case of London is still under consideration.

One encouragement was the announcement on Wednesday night in Northern Ireland that contact sport would be allowed from July 17th.

“So that would mean that our two jurisdictions would marry together on our roadmap,” said John Horan.

The programme starts with a completion of the national leagues. There are two remaining rounds of the football after which the top team in each division will be named the winner without any finals.

Divisional hurling finals will be played but in the top flight whose title rests between Limerick and Clare, as winners of Divisions 1A and 1B respectively the counties’ October’s Munster quarter-final will double up as the league decider.

There will be a commemoration on the centenary of Bloody Sunday, November 21st, which falls on a Saturday. Given that it also falls on the day of the Leinster football final, any straightforward staging of a Dublin-Tipperary match is likely to be complicated by the former’s possible (probable?) presence in the provincial final.

The concept for the occasion is that the challenge match between Dublin and Tipp in 1920 should be ‘completed’. It was fatally interrupted in the eighth minute when police and military entered the ground and in the atrocity that followed, 14 died.

It is expected that players from other counties will also participate in what is hoped to be a national commemoration of the GAA’s most infamous day.

Here is your handy guide to sport on television this week 17:01
Trezeguet double against Palace boosts Aston Villa’s survival hopes 16:48
Lewis Hamilton puts in dominating drive to claim Styrian Grand Prix 16:25
‘Jack used to call me his official grasshopper keeper. We had a great time’ 16:26
Leeds march on thanks to late Pablo Hernandez winner 15:50