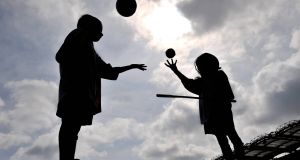 This summer’s Kellogg’s GAA Cúl Camps are still scheduled to go ahead with contingencies in place if they have to be cancelled. Close to 160,000 children took part in te camps last summer. Photograph: David Maher/Sportsfile

It might appear wishful thinking but the GAA Cúl Camps are still scheduled to go ahead this summer. Organised by counties and clubs and now something of a national institution, they were described by association director general Tom Ryan in February’s annual report as “the biggest child sport promotion in the world”.

Last year they attracted nearly 156,175 children between the ages of six and 13 to 1,250 centres around the country.

This year’s camps, scheduled for July and August, have been thrown into doubt by the coronavirus pandemic but the scheme’s national co-ordinator Charlie Harrison has been hard at work to give children – and parents – a glimmer of hope.

As a former Sligo footballer, his track record of triumph in adversity is proven as one of only four players from his county to have both a senior Connacht medal and an All Star. And although he acknowledges that the go-ahead is entirely dependent on the public health authorities he remains positive.

“We’d love for the camps to go ahead obviously and I think parents would as well given that nearly 160,000 kids are involved. Our booking system is still live and we’re taking bookings every day although obviously not at the rate in previous years.

“I’ve put up a statement on the website, assuring parents that if we have to pull the camps because of Government advice there will be a full refund and maybe that’s why people are still confident enough to book. Camps usually run for nine weeks but we could tweak that depending on the opinion of the authorities.”

It’s not a blindly optimistic view, as he believes that soundings from Government support the view that there could be a return to permitted gatherings of no more than 100 indoors and 500 outdoors.

“We were encouraged by the official statements that opening primary schools was being considered on a once- or twice-a-week basis and Taoiseach Leo Varadkar talking about staged progress out of the current restrictions.

“We’ve a number of scenarios put in place, depending on Government advice. We can cap our camps at a specific number of children.”

He is aware of the challenge. Earlier this week, former GAA president Liam O’Neill, a former school principal, said that permitting children to return to the playing fields would be fraught with difficulty given their tendency to congregate and seek physical contact.

“We would obviously be doing everything within the regulations before going ahead. We’re very flexible on what conditions we work under and will try do everything we can to make it happen.

“If junior infants go back, the schools would be in the same boat. If for instance the Government says, ‘well you can only have a certain age cohort’, then we’d have to operate within those restrictions. They are physical activity camps so they’re outdoors.

“One of our working scenarios is that we wouldn’t even open changing rooms and they’d be outside and even eat their lunches outside, weather depending and within social restrictions. Even if we did have to go inside we could cut down the numbers to make sure everyone’s still two metres apart.

He has been researching the best way of approaching the problem by looking at the progress of relaxed restrictions in other countries.

“We’ve been sourcing hand sanitisers and soap to make sure that all of our venues have those materials. We’re coming up with different protocols and I’ve been in touch with people in Denmark about their return-to-school experiences so we’d be following those with regard to drop-offs and pick-ups with parents not getting out to talk to each other and keeping our groups small – that type of thing.

“We’ve prepared for all sorts of different scenarios: what to do if someone gets ill and supplying information for contact tracing.”

The camps are hugely popular both as recreational outlets and some of the bigger clubs around the country can attract hundreds of children during the summer holidays.

Playing gear and equipment have already been purchased by Croke Park but can be used again in 2021 if there is no activity. Registration fees range from €65 to €50, depending on how many from the same family attend and bookings are continuing to be taken even though there is ultimately no guarantee activities can take place.

The official website for the campsstates that there will be a full refund and no administration fee charged should they be cancelled on the advice of the authorities due to the coronavirus pandemic.