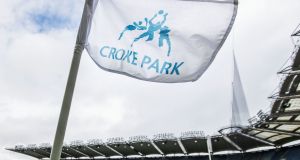 ‘It appears increasingly unlikely that there will be a significant programme of inter-county GAA games before the end of the financial year [October 31st] due to the ongoing Covid-19 emergency,’ said a statement from the GAA. Photograph: Tommy Dickson/Inpho

The GAA has informed staff of further pay cuts in response to a bleak financial analysis, which envisages little prospect of a significant games programme before next November and a precipitous loss of revenue for 2020.

Thursday’s communication said that the association intended “to provide details to employees about the challenges and difficulties facing the GAA and the further measures that are, unfortunately, required to mitigate against the fundamental risks posed to the GAA by the ongoing Covid-19 emergency”.

There is no doubt that the situation facing Croke Park has deteriorated in the past month, with the national lockdown extended to May 5th and expected to be further extended after the coming bank holiday weekend.

A Government directive earlier in April that no events with crowds bigger than 5,000 would be permitted until the end of August was not specifically targeted at sports events but realistically the GAA accepted that its senior inter-county championships are not going to be in a position to take place any earlier.

That acceptance has hardened into the more pessimistic assessment that the association will be lucky to see any meaningful championship activity this year.

“At the present point in time, it appears increasingly unlikely that there will be a significant programme of inter-county GAA games before the end of the financial year [October 31st] due to the ongoing Covid-19 emergency, with the result that there will be no significant revenue generated or cash received over the coming months.

“Such prospects mean that the GAA faces a serious financial predicament which, unfortunately, necessitates further reduction of all costs incurred by the GAA including payroll costs.”

With virtually nothing coming into the coffers, the decision has been made to introduce a sliding scale of pay reductions.

“As part of the emergency measures,” the document states, “the GAA shall be availing of the financial support available under the Temporary Covid-19 Wage Subsidy Scheme as far as possible in order to reduce the financial impact on employees and the GAA.”

The measures apply to the Republic of Ireland only, with the Ulster Council handling these matters in Northern Ireland, as the state support scheme is administered differently.

Although the range of measures applies only to those directly paid by Central Council and Croke Park, it is recommended that provincial councils and counties follow suit.

The cuts are to apply during May and June but will be reviewed on an ongoing basis, as the pandemic evolves. There was also further detail provided about the stated temporary nature of the measures.

“The measures are temporary, and all employees shall revert to their normal income payment(s) as soon as possible once the current nationwide Covid-19 emergency is concluded.

“The impact on each employee’s monthly income is intended to be a deferment of a portion of income until a later date as opposed to an income reduction. The GAA shall make every effort to provide full reimbursement to all employees of the portion of income waived pursuant to these measures as soon as possible after the conclusion of the Covid-19 emergency.

“Unfortunately, given the current financial predicament of the GAA and the uncertainty over the duration of the Covid-19 emergency, it isn’t possible to provide a timeline for the reimbursement of the portion of income waived or indeed to provide a complete guarantee that reimbursement shall be attainable. However, the GAA will make every effort in this regard.”

There are also assurances given about the entitlements of those employees on the pension scheme.

“Please note that for all employees, the GAA is committed to ensuring that the emergency measures have no lasting impact on the employee pension contributions in respect of each employee.

“Any short-term reductions in the employer or employee pension contributions caused by the emergency measures or the operation of the Wage Subsidy Scheme shall be corrected as soon as possible upon the conclusion of the Covid-19 emergency.”