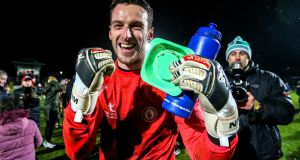 Niall Morgan: “Now that we’ve had so much time at home, it’s going to be hard to give up five or six days a week again.” Photograph: Tommy Dickson/Inpho

Tyrone goalkeeper Niall Morgan has said he’s unsure if he’ll be willing to give as much time to inter-county training and preparation when activity resumes.

The 2018 All-Ireland finalist reckons it will be “hard to give up five or six days a week again” after seeing what he’d been missing out on during the lockdown.

Goalkeeper Morgan, whose new son was born in January, said it was only when football was parked for several months that he considered what he was missing out on and he believes other players feel the same.

The Edendork club man, 28, was speaking on Tomas Moore’s Inside the White Line podcast and the full interview can be accessed through Twitter.

“Tyrone, to be fair, they don’t expect too much of you but come championship time you’ll have your video work on Saturdays and stuff as well which can be a bit time-consuming,” said two-time Ulster title winner Morgan.

“Now that we’ve had so much time at home, it’s going to be hard to give up five or six days a week again. I don’t know whether I personally will be willing to do it and there’s a right few in the same boat that I’ve been talking to.”

Inter-county teams will be permitted to resume training on September 14th with competitive action scheduled from October 17th.

Morgan said he’s read reports that the GAA could return initially with the outstanding Allianz League games and then run the Championship right up to Christmas, a plan he believes would be crazy.

“That would be crazy stuff, not only in terms of for the players but how many pitches are going to be able to hold it?” he said. “You’re going to end up playing every game in Croke Park to get enough light and a surface that’s good enough to play on.

“Then are we going to play the pre-season competitions, are we going to be straight into the McKenna Cup which starts the week before the new year now? It would be crazy to expect players to start training in October and only have a week off maybe at Christmas and go straight into another season.

“To reiterate my point from earlier, there’s a lot of players that aren’t going to be willing to put in the same level of commitment and it would only put players off.”

Morgan believes the long-term answer is to trim back the inter-county season by making the championship an all-island straight knock-out competition.

“Personally, I’ve always said I’d prefer a 32-team straight knock-out competition and get rid of the backdoor and make games more appealing to people because they really matter,” he said.

“I would still like to play my provincial, play my Ulster championship but I would just move it to before the league, almost where the McKenna Cup is. Play your provincials, play your league and all the teams then into a hat for a 32-team knock-out. It would also leave a lot more time for your club. It would get rid of a lot of weeks off your county calendar, you could probably wrap up your county calendar by July and it would leave you with four or five months free to play all the club football.

“I think at the minute the GAA is forgetting about a lot of club players. Realistically without them you don’t have a GAA, you don’t have what we have and what we’re proud of.”

* Inside The White Line is a podcast hosted by