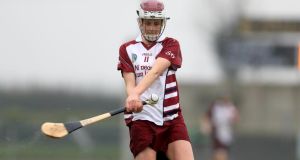 Eilis Ní Chaiside: “A lot of us would be involved in the Irish Language, but where we come from and where we live, it’s not a matter of ‘you must do this’, it’s a matter of choice.” Photograph: Donall Darmer/Inpho

Talk to those in Slaughtneil, and they might let you in on a secret that it is the camogie team that drives the rest of the club on.

Put it directly to one of their camogs, Eilis Ní Chaiside, and she spells out the typical week of a Slaughtneil camog, darting from indoor facilities in the Dunloy Centre of Excellence, Magherafelt, Lavey, and their own gymnasium at the clubrooms as they get ready for this Sunday’s All-Ireland camogie final, defending their title against Sarsfields of Galway again.

“From the Ulster [campaign] through to the All-Ireland we are at a gym programme. Each week will consist of three pitch sessions. And then you are expected to be in the gym twice on top of that,” she states, not a trace of Paddy O’Rourke self-pity in that strong Derry accent.

What do they do in those sessions?

“A lot of body weight stuff. A lot of conditioning, rather than strength training. Even a lot of stuff on flexibility, a lot of stretching, keeping the body agile, mobile and stuff like that.

“It’s more so to prevent injuries. This year, given the weather conditions, we have been going between 4G and pitch sessions. The weather has been less than favourable and we find ourselves on the 4G pitches a lot.”

And she’s not complaining in any way, delighted at the way in which ladies’ football and camogie have embraced the digital age and left sports fans not at the mercy of club notes or parish bulletins.

Ní Chaiside is one of a new breed of Northern nationalists who have found their voice in the depressing impasse at Stormont.

An Irish language medium teacher in Gaelscoil Neachtain in Dungiven, she is one of many Slaughtneil players who are fluent in Irish and has her own views on the current row over an Irish language Act that acts as a convenient roadblock to political progress.

“A lot of us would be involved in the Irish language, but where we come from and where we live, it’s not a matter of ‘you must do this’, it’s a matter of choice,” she reasons.

“So we would have the opportunity outside of school to make it a part of our daily routine. It’s a very open-minded thing and it’s a part of the country, I think the Irish language has survived for so many years and has gone from strength to strength and now that hundreds of thousands speak it, hundreds of thousands are employed daily and it’s unbelievable that’s there’s no legislation behind it to back it up.”

In last year’s RTÉ documentary The Geansaí, they devoted a good chunk of the programme to life at the Cassidy household. Anne Marie and Thomas Cassidy brought up seven children, close in age to each other to earn the description “steps of stairs”, but they had plenty of room for everyone outside, where the sizeable back lawn was fashioned into a hurling field.

From all around, people in the area were drawn to the house for five-on-five games, where Eilis, a wing-forward by trade, learned the hard way against defender sisters Brona and the team captain, Aoife.

“Every evening we had and even before competitive games,” recalls Eilis, “Mummy would have had us out after school to teach us and pass on the skills”.

Anne Marie had played camogie for Slaughtneil. For a time, the game died out in the area before Thomas took on camogie and hurling with a missionary zeal.

Thomas passed away in October 2016, a matter of days before his sons Sean and Eanna played and won the first Ulster hurling club title for a Derry side with victory over Loughgiel.

Hurling captain Chrissy McKaigue recounted after that game how people would tell Thomas that he was wasting his time. The emotion that day in the Athletic Grounds touched everyone.

At his funeral, Parish priest Fr Kieran O’Doherty stated, “He had higher ideas than himself. His efforts cannot be fully known; they are resistant to definition.”

A few months on and his daughters were all preparing for their camogie All-Ireland final against Sarsfields, the grieving process still achingly raw.

“Last year, it was emotional, definitely. Even the week before the match, I was really, really feeling it,” Ní Chaiside admits.

“Due to the fact he wasn’t there and the amount of work and effort he put in, but I think that is a reflection of the work that went before that.

“Even the match itself. Slaughtneil, we didn’t know why but I felt really weak in the lead-up to the match and on the day of the match, I was fine. Felt really strong. But again, I would be hoping to emulate that on Sunday.”

They always say things are impossible until they are done. And the men and women of Slaughtneil have the capacity to dream big.