CCCC investigation unable to identify those responsible for half-time incident 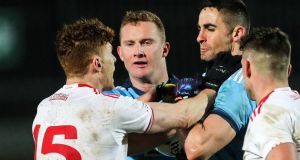 Dublin and Tyrone county boards have been fined €5,000 for the brawling scenes that erupted at half-time in their recent league match in Healy Park, Omagh. The punishment follows an investigation into the incident by the Central Competitions Control Committee (CCCC).

It had already become known that no players would be suspended for their roles in the fracas, as the video evidence was inconclusive, even though it was clear that there had been a major breakdown of order as the teams left the field at the break in a match won by Tyrone.

Broadcast footage showed blows being struck but the identity of the combatants was not possible to confirm.

There had been other camera angles on the disorder, recorded on mobile phones but none of them were conclusive either. Video posted on social media isn’t always permissible as evidence but it can be used if it gives clear pictures, which are unavailable from other sources.

Both counties have accepted the fines and several players are lucky to escape censure in the circumstances.

The only player punished for what happened is Tyrone’s Pádraig Hampsey, who was sin-binned after receiving a black card from Meath referee Cormac Reilly for verbal abuse as the players went off at half-time.

There had already been controversy with the match given the go-ahead despite the worst attentions of Storm Jorge – a decision that the GAA denied had been influenced by pressure from television companies, who had no other fixtures to broadcast.

In a timely – or otherwise – coincidence, the counties will meet in next week’s All-Ireland under-20 football semi-finals, which have been confirmed for St Patrick’s Day.

Both semi-finals are to take place in Croke Park. Kerry face Galway at 2.0 with Dublin v Tyrone following at 3.45.