Led by local talent, DCU secure their easiest title yet against first-time finalists IT Carlow 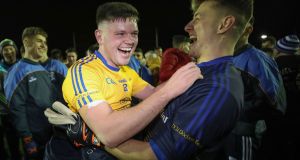 Managed by Paddy Christie and led superbly on the field by his Ballymun club mates Paddy Small and Evan Comerford, DCU secured arguably their easiest title yet.

Playing all of their games on home soil at the DCU sportsgrounds as tournament hosts, the Glasnevin side had seven points to spare on first-time finalists IT Carlow, having previously dispatched UCD by 15 points and Queens by 26.

In the end, their two-point win over Garda College in Round 1 turned out to be by far their toughest assignment of a dominant campaign.

Christie, part of the Tipperary management team, got his tactics spot on again as DCU played a patient game and bided their time against IT Carlow’s counter attacking formation.

In high winds, DCU had to be particularly patient as they butchered two first-half goal chances and led by just 0-5 to 0-2 at half-time.

That was a concerning lead because the cross-field breeze was strong and favoured IT Carlow in the second-half but Pat Critchley’s men were unable to take advantage.

Like UCD in the semi-finals a week earlier, the underdogs couldn’t seem to score from play, with six of their seven points coming from Cian Farrell frees.

They needed a goal that never arrived and DCU, in turn, were more than happy to pick off the points in a controlled and commanding second-half performance that oozed experience and quality.

Small kicked two beauties during that second-half as they turned the screw while Comerford drilled three long-range frees on the evening, days after facing up to Kerry at Croke Park in the Allianz League.

David Garland had another strong game up front, scoring 0-4 and taking his tournament tally to 1-14, while fellow Monaghan forward finished the evening with 0-3 and the campaign with 3-15.

IT Carlow were frustrated by two black cards to defenders late on, which allowed DCU to play the ball around them for long spells and burst through for scores when openings inevitably arose.

Shane Carthy, a former All-Ireland minor, under-21 and senior medallist with Dublin, impressed in midfield again while Sean Bugler, who made his Championship debut for the Dublin seniors last year, fisted over their last score in injury-time.