David Shanahan: The Kerryman headed for Georgia Tech by way of Australia

After securing a scholarship, Shanahan will be kicking in front of 100,000 people 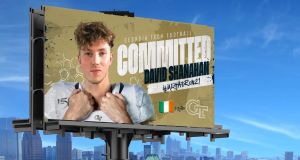 David Shanahan will take up his scholarship at Georgia Tech next January.

When he was 15 years old, David Shanahan had a half-baked idea of how he might get to go to an American college. A rugby scholarship would be the quickest route, he reckoned. Like, really and truly, how high could the standard be? “I was thinking I might get over on a rugby scholarship and then maybe chance my arm with the football when I got there. Sure I was only dreaming away really.”

In fact, his actual route has been only slightly less far-fetched. Four years ago, he ordered some American footballs online and took them down to his local GAA pitch in Castleisland to kick around. Last August, he went to Melbourne to join an Australian programme designed to identify kicking talent for American colleges. Next January, he will become the first Irishman to take up an American football scholarship in the US, having been signed up as a punter by Georgia Tech. All going well, he’ll be playing games in front of 100,000 people when the world gets back to allowing that kind of thing.

I kicked a few balls for him and after it he told me if I moved to Melbourne and trained for the winter, I could probably get a scholarship

Shanahan played up to under-17 level with Kerry but missed out on his minor year when the age group was lowered in 2018. By that stage, his ambitions had turned to American football anyway. As a fan of college football, he noticed that a lot of the punters were Australian. In fact, for six of the past seven years, the Ray Guy award for the best punter in college football has gone to an Aussie and all of them are products of the Prokick programme in Melbourne.

“So I decided that if I was really going to go for it and to try and get an American football scholarship the only way to do it would be to go through Prokick. Prokick is basically an American football kicking and punting training organisation run by two ex-NFL players, John Smith and Nathan Chapman.

“Last June I put together a little clip of me kicking and sent it to them, and one of the coaches John Smith gave me a call the next day. As it turned out, he was actually in Manchester at the time and he told me he’d fly over for an assessment the following week. I kicked a few balls for him and after it he told me if I moved to Melbourne and trained for the winter, I could probably get a scholarship.”

Which he duly did, last August. Hothoused with five other Prokick prospects, he trained away in Melbourne for seven months. At 6’2” and with natural athletic strength, Shanahan flourished in the programme and by the early part of this year, there was talk of interest from several colleges. Whereas American kids don’t grow up wanting to be good at kicking an oval ball, Aussie kids do. Prokick’s reputation has grown accordingly over the past decade and Shanahan is the first from this part of the world to try his luck.

Shanahan has never actually played a game of American football, nor has he even been to see one

“It’s a real technique-orientated skill. The best I could compare it to is driving a golf ball. It’s very technical. Small things make a big difference. In general, if you’re a good athlete you’ll be a good punter. Height comes into it a bit. If you’re tall, it helps. If you have explosive hips, it helps. A lot of it is physics. Our coach is always saying it – force is mass by acceleration. You want to be big, you want your legs to be quick.”

In a way, the training has all been in the abstract so far. Shanahan has never actually played a game of American football, nor has he even been to see one. In this regard, his parents have the jump on him.

“I’ve actually got an aunt in Atlanta, Georgia so on our way to Melbourne last summer, my parents and I stopped over in Atlanta and spent a couple of weeks with her there. I left them there and went on to Melbourne to start training but my mom and dad actually stayed on for a week and ended up going to a Georgia Tech game. They were playing Clemson.

“This was months before there was ever any possibility that I might be going to there. It was pure coincidence. So yeah, they’ve been to a game but I haven’t. I think Dad was going, ‘Ah, right, that’s what this fella is up to.’ My mom I’d say was a bit scared at the whole prospect of it.”

And yet, here he goes. There have been Irish kickers in college football before. Neil O’Donoghue from Clondalkin went to Auburn on a soccer scholarship in the 1970s before being repurposed as a punter and eventually making it all the way to the NFL. More recently, Cork-born Darragh O’Neill, son of former All-Ireland winner Colm O’Neill was the punter for Colorado in 2011. But Shanahan will be the first to be brought over by a major US college on a full scholarship.

“Around the start of April the coaches told me they were hoping to send me to Georgia Tech. I was really excited. Georgia Tech plays in the ACC football conference. They play some really big games every year too against teams like Notre Dame, Clemson, and a few more huge colleges. Some in front of over 100,000 people. A few weeks later I was told I had been offered a full scholarship to play football there. I was ecstatic. It’s a dream come true.”