Darragh Ó Sé: I stopped getting flu jabs because of drug tests 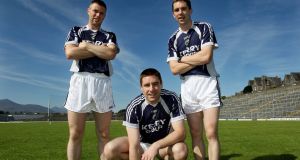 Tomás, Darragh and Marc Ó Sé at a Kerry training session in 2009: We were well used to the lads from the Sports Council arriving to do tests. Photograph: James Crombie/Inpho

If there is one thing that is very obvious from the Brendan O’Sullivan case, it’s that within the GAA, we don’t take this side of things seriously enough. I think it’s clear that there is an attitude across the GAA that doping doesn’t happen – and in fairness, I would imagine it probably doesn’t. But that’s not the same as thinking it can’t. You’d be mad to think that.

I don’t buy into this argument that because GAA players are amateur, they shouldn’t be drug-tested. All you want in sport is to know that you’re competing on a level playing pitch with everybody else. As long as there is drug-testing, there is a deterrent. Don’t tell me that just because people aren’t getting paid, there’s no incentive to cheat. Sure that’s nonsense.

Have GAA players taken stuff over the years? It wouldn’t surprise me. In fact, it would be a fair shock to find out that nobody ever has. I never saw it and never heard anything beyond idle gossip. It was never concrete enough to be something I worried about.

I remember a trainer telling us one time about the world of high-level sprinting. When you made it to world championships and Olympic level, the medals basically went to whoever could pay the most money for the best doctors.

It wasn’t just a case to stick a needle in your backside and away you go. To win at that level, you needed long-term planning, proper mapped-out cycles of taking stuff, precise amounts at specific times of the day for certain periods.

This wasn’t like an organised talk or anything – it was just a random topic that came up in conversation one night. We could have fallen into a chat about a Champions League game or a good restaurant that had just opened or anything. But I remember the main thing I took away from it was, “Well now, I’m glad we don’t have to worry about any of that. Christ, I have enough on my plate!”

Over the years, that has stuck with me as one of the reasons I would think it’s fairly safe to assume that the GAA doesn’t have a major problem with this. As I’ve said, I don’t doubt that the incentive is there – I’m just not sure where a GAA player would find the time, money and expertise to do it.

I’m not saying most GAA players are thick – but let’s face it, there’s not a lot of biochemists around the place either

It occurred to me one time that if anyone was doing something, maybe it would be college lads doing seriously high-level degrees who would know the science of it and be comfortable navigating that world.

I’m not saying most GAA players are thick – but let’s face it, there’s not a lot of biochemists around the place either. All players want to win, they want an edge. Some are more committed than others, some will go further than the rest. But, in all honesty, my feeling would be that the vast, vast majority of players would take one look at how complicated and costly a serious doping regime would be and just decide it wasn’t worth the hassle.

That’s how players approach anything. Getting paid or not getting paid has nothing to do with it. You sit down and you size up what’s in front of you. What’s worth the hassle and what isn’t.

Add it all up and I just can’t see it being a widespread thing. Now obviously, there’s a danger in thinking like that. That’s how people get complacent. And you’d have to say, the GAA approach to this has always been fairly shambolic. The starting point has always been, ‘Sure there’s none of that in our game.’

Every couple of years, there’d be a big burst of enthusiasm and you’d be made sit down and listen to a big talk about the dangers of taking the wrong thing. We’d get the shock and awe treatment. Doctors, nutritionists, experts. Be careful out there, lads. There’s a big push now to be seen to get the testing right and there’s no leeway. It’s being policed and it’s a no-go area.

It was always scare-story stuff. Think of the fallout, lads. Imagine your name in the papers for taking the wrong cough medicine. Ye’ll bring shame on your family, shame on the green and gold. Don’t risk it. Read the label on everything and if you have any doubts, make sure and ask before you take anything. If you’re asthmatic and you’re taking anything, we have to fill in the form and flag it up. No mistakes, lads.

And we’d all listen along and then head away off, the life frightened out of us for another year. Or it might be another two or three years in some cases, until someone decided it was time for another talk. I would bet my life that intercounty panels all around the country will be getting the talk at some stage this week after what has happened.

The thing was, it worked. I used to be a nervous wreck after those meetings. There was a couple of years when I didn’t get the flu jab during the winter because I was half-afraid I’d do a drug test somewhere along the way and something would show up. It was the height of ignorance on my part.

But this is what I mean in terms of not needing the hassle. I knew I could probably get a flu jab and it wouldn’t be a problem. Or if it was a problem, all I’d need to do would be fill out a form saying that I got the flu jab ahead of time. But in my head, I was going, “Do I really need this, now? Am I only complicating life for myself by having to fill out forms and provide dates and times and explanations and all the rest of it?”

So I simplified everything and didn’t get the jab. Looking back now, it’s probably the wrong way to go about things. But when the whole GAA approach to doping is all about fear and paranoia, how else are you going to think about it?

You can have fun with it too. There was one time in the mid- to late-2000s when I was trying out a new energy drink. It was rotten stuff altogether but I found it was giving me a bit of a leg-up at training and in games. It was legal, no hassle. I checked all the ingredients and it was fine and I passed a drug test after a game in Fraher Field. It was nearly all natural anyway – there was nettles and salts and all manner of shite in it. That’s why it tasted so rank.

That energy drink. Sure it’s totally illegal. We won’t pass a drugs test

I was supping out of it one night in training and Tomás came over looking for a slug. He took a drink of it and nearly spat it out. “Jesus, that’s desperate stuff,” he said. And sure that only made me talk it up to the hilt.

“Oh, it’s mighty,” I said. “It’s getting me through these sessions, especially in this heat.” So Tomás held his nose and got on board and started drinking it as well.

A few nights later, we were back in Fitzgerald Stadium and the lads from the Sports Council arrived. We were well used to them and everyone knew the procedure – three names were drawn out of a hat and if your number came up, you had to go and do the business. But as soon as I saw them, I sidled over to Tomás.

“We’re in trouble here,” I said to him, under my breath.

“That energy drink. Sure it’s totally illegal. We won’t pass a drugs test.”

“We can either run for the hills or take our chances that we won’t be picked out. What do you think?”

By then I couldn’t keep a straight face any longer. When he realised I was messing with him, he nearly planted me.

The point to remember is that there’s still a high level of ignorance about all this in the GAA. Fear and paranoia will do a lot of the work to keep the sport clean and the fact that there’s no culture of drug-taking plays a part as well.

But without constant updates and education for players, the danger of something going wrong will always be there.

1 Sporting Cathedrals: How the Olympiastadion overcame history
2 James Ryan injury could open the door for Ryan Baird
3 All in the Game: Klopp gets the last laugh in quiz show
4 Banned Totti gets roasting over spit
5 Lockdown hiatus may afford way back for Waterford hopefuls
Real news has value SUBSCRIBE