Darragh Ó Sé: Greg Kennedy's catch is an early contender for laugh of the year 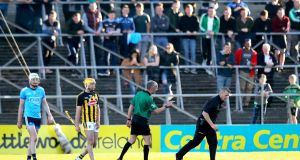 You have to hand it to Gregory Kennedy.

(And sure even if you puck it at him, he’ll just catch it and throw it back.)

Ah, come on. I know we’re all supposed to be outraged but in fairness, if you had to pick out the most enjoyable thing from the first big championship weekend of the summer, you’d struggle to find better than the Dublin maor foirne catching the ball in the Kilkenny match in Nowlan Park on Saturday. Fellas can cry blue murder all they like – you just know that secretly they all have a small bit of admiration for him.

When you watch it back, there’s no doubt it was deliberate. At the time, it just looked like he happened to find himself in the wrong place at the right time and stuck up his hand out of pure instinct. But it’s actually so blatant that it gets funnier every time you look at it.

TJ Reid is bending over to place the ball when Kennedy realises that there’s a Kilkenny player, Billy Ryan, standing all on his own on the 20-metre line. Kennedy changes direction as he’s jogging across the pitch and makes sure he’s between Reid and Ryan. I presume all he was trying to do was slow the thing down and stop Reid playing the ball in the first place. But when it’s pucked his way, he decides he may as well be hung for a sheep as a lamb. And we all saw what happened next.

I’ve said it before – would you be a referee for all the money in the world?

If you’re not the lad down in Páirc Uí Chaoimh getting a belt of a sliotar in the back of the head, you’re in Nowlan Park trying to keep track of 30 players and a maor foirne who still thinks he could do a job at corner-back.

People were saying it was a disgrace Kennedy wasn’t sent to the stands but I’d say referee Cathal McAllister was nearly too shocked that it happened at all to do anything like that about it.

Kennedy sold it well too, in fairness to him. The way he threw the ball back to the referee, he let on as if it was only right and proper that he was there. His first move was to brazen the whole thing out, act as if it was the most natural thing in the world.

Years ago, we were playing Limerick in the Gaelic Grounds in the first round of the Munster championship. We were having a team meeting on the morning of the game in the back room of a clubhouse in Limerick city when a couple of lads who were in for an early pint wandered in on the way back from the jacks.

Páidí Ó Sé was up the front of the room going through his tactical plan and these two Limerick fellas just came and stood at the back of the room. I’d say they were in their late 50s, maybe early 60s. One way or another, they weren’t one bit worried that they’d walked into the wrong room. And they were in no hurry out of it, either.

That was Greg Kennedy on Saturday night when the ball came to him. He acted in the moment as if he was supposed to be nowhere else on earth and I think it threw the referee for a second. Add in the fact that it had happened when his back was turned, it all meant that by the time the ref gathered himself, Kennedy was away and gone and walking off the pitch shaking his head at the whole thing. Beautifully done.

Now, you could see Kennedy was sheepish about the whole thing coming off. In fairness, how else could he be? Brian Cody, Derek Lyng and James McGarry were all lined up to meet him on the sideline. Sheepish is the only way to go there – if he got overly mouthy about it, anything could have happened.

I don’t blame Cathal McAllister at all here. It’s one of those classic GAA issues. Everybody knows there are rules around what a maor foirne can and can’t do but everybody takes them more as a sort of a suggestion than a set of laws. The rule book couldn’t be clearer and yet everybody just treats it like a grey area.

Let’s say a player goes down with an injury and there’s a bit of pushing and shoving around him. The play stops and next thing you know you have physios on the pitch and then doctors and a maor foirne (or two) and the odd selector and maybe a blood sub and sure throw in a county secretary as well if the whole thing is really getting out of hand. He’s not going to send us all to the stands, lads.

So in a way, I suppose it was always going to come to something like this. You’d see the fourth official the odd time giving a warning to the maor foirne about not going onto the pitch so often but nobody worries too much about that.

You’re always going to say sorry but you’re always going to keep doing it until they physically stop you. It’s like the joke about the child who got tired of praying to God for a bicycle and decided he’d be better off stealing one and asking for forgiveness afterwards. Every maor foirne learns that lesson early.

At the same time, they have to know their place. As long as you come in, pass on your message and go back to your spot without interfering with play, nobody is going to mind too much. It’s when they forget that they’re not actually playing that the trouble can start.

We had it with John Toal, the Armagh maor uisce in 2006. I played against John down the years and he was a tough bit of stuff. He wouldn’t have been known for his easygoing demeanour, put it like that.

I enjoy watching out for the various teams and their maor foirne these days. Kerry had Liam Hassett there for a couple of years, another fella who’d have plenty of wisdom to pass one when he got out on the pitch, whether it was asked for or not. To be fair to Liam, he’d be carrying instructions with him for the opposition as well as his own team. He’d be very accommodating like that.

Nearly all teams have ex-players in that role now and given the demands of it, they need to be only recently gone from the game to survive. The whole thing is a spillover from Aussie Rules. It would have been in International Rules series that the GAA got the idea.

Ger Power was our runner in one series in the early 2000s. Now Ger kept himself well but by that stage, you wouldn’t say he was recently retired. And Croke Park is a big place. He ended up pulling a hamstring.

I remember in one of the games he came on to give me a message from the sideline and I took it on board and said ‘grand, right, no problem’. Stephen Cluxton was our goalkeeper and I told Ger to go in and give him a message, something about kick-outs, I can’t remember exactly what now. Ger looked at me and looked at the distance to the goal and then looked back to me.

“Ah, we’ll leave that until half-time,” he said, and jogged away back to the sideline.

Ultimately, players have to be alive to the things that are going on around them. Every county has chancers who will try things on – you’ve got to make it clear that you won’t stand for it.

Kerry people were getting annoyed last year in Clones when a ball kept mysteriously appearing on the pitch any time the goalkeepers lined up a kick-out, killing time while Monaghan were in the lead. But to me, that’s the wrong way to look at it.

My reaction was that was up to the Kerry goalkeeper to be out to the referee and laying down the law in the following terms. “My job is to kick the ball out – your job is to make sure there’s only one ball on the pitch. If some lad behind the goals is throwing out an extra one, find him and move him. It’s happening too often to be an accident.”

Now, in saying that, I don’t know if there’s much Reid or Ryan could have done the other night. Of all the things they could have been expecting, a Dublin selector doing a man-marking job out of the blue was hardly on their radar. It was just one of those things – mad, controversial and, let’s be honest, hilarious when it comes right down to it.

If we get one of those every weekend, it’ll be the most enjoyable summer in a long time.