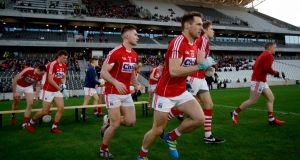 Kerry will bring a big crowd, if only to see the new Páirc Uí Chaoimh for the first time. Photo: James Crombie/Inpho

First of all, I suppose I should hold my hands up a bit over my column ahead of the Kerry v Cork game last year. Only a bit, now – no sense getting too upset over it. I thought Cork would be better than they were. Or maybe I was worried they would be better than they were. They turned up against Mayo three weeks later and gave them plenty of it so I wasn’t too far off. But I got it wrong. No point pretending about it.

People think it’s cute-hoor stuff but it’s actually the complete opposite. It’s a fear that they’ll rise up again – which they definitely will at some stage. I spent my early days as a Kerry footballer losing to Cork and even in their worst days, I’m always wary of them coming up with something. So no matter how bad they’re going, I never think it’s just a matter of turning up and giving them a hosing.

9 ‘I’m the meme queen’: A Q-Anon digital soldier marches on

11 Vaccine should not be given to people close to death, says HSE

13 Joe Biden’s presidential inauguration: Where can I watch, and what are the key moments?

15 Nuns who ran the Bessborough home in Cork sold part of site for €6.85m

20 Warming curry bursting with flavour but not the fat

21 ‘I got a burning smell in my nose’: Third-wave Covid-19 patients share their experiences

22 The Offload: Ronan O’Gara more than willing to take a punt on Jack Crowley

36 Una Mullally: Will Lockdown 3.0 bring about a political awakening?

38 Five habits learned during the pandemic that we should keep

39 Breakthrough in treatment of breast cancer reported by RCSI researchers