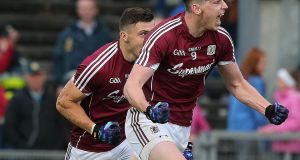 Galway’s Thomas Flynn celebrates after scoring a crucial goal during the victory over Mayo at McHale Park in Castlebar. Photograph: Lorraine O’Sullivan/Inpho

Everything goes in cycles. Galway beating Mayo on Saturday night was obviously a shock but we probably shouldn’t be too surprised that it happened. Mayo were never going to dominate Connacht forever. Believe it or not, the Dubs aren’t going to win every Leinster title from now until the end of time either. Meath probably won’t beat them on Sunday but it will happen eventually. These things come around and go around.

It isn’t all that long since Meath, Galway and Kerry were the only three teams in the country who could win All-Irelands. In the early-to-middle part of my career, Meath and Galway were the big rivals for us. For six straight seasons between 1996 and 2001, we won two All-Irelands apiece and very often we had to go through each other to get them. After that, the northern teams took their place and Galway and Meath fell away.

There’s no disgrace in that. Famines happen very easily. When I started playing for Kerry in 1993, we were way down in the depths of a famine. I came on board not long after Kerry had lost to Clare in the ’92 Munster final. To Clare! That was only six years after the last All-Ireland of the golden years team. It can happen nearly without people noticing.

It’s very simple, actually. The one downside of having a great team is that most counties cling on to them longer than they should. Players build up a bank of credit that they still get to use a fair while after they’re good for it. And when you have players who are over the hill getting picked, you also have guys who are up-and-coming getting impatient at having to wait their turn.

Straight away, you have not one, not two but three problems. First, you have players in the team who aren’t as effective as they were or as you need them to be. Second, you have young players who aren’t developing at the rate you’d like them to because they aren’t getting games. And third, you inevitably lose some of those younger guys because they get fed up waiting. So you’re suffering in the present and sowing seeds for suffering in the future.

But what’s a manager going to do? Ditch the guys who got him up the steps of the Hogan Stand? Go with a 20-year-old who might be a crucial player in three or four years ahead of a 33-year-old former All Star and take a world of flak from the media and the public if it doesn’t work out? Brian Cody does it but there aren’t a lot of Brian Codys out there.

Of course, some guys are irreplaceable. John McDermott retired at 31 and Meath never really recovered. Without him, Meath were a different animal. They weren’t as good at bullying you. They had no enforcer so you got away with things against them that you wouldn’t have chanced before.

Meath were always more than just bullies who could play a bit but when you took away that aspect of them, you took away a piece of their identity. When Sean Boylan left a couple of years later, that was another bit of it gone. What replaced it? Maybe a bit of apathy, maybe a bit of confusion, probably a bit of both. Counties can lose direction so easily in those circumstances.

Things that were unthinkable become acceptable. I was playing intercounty football for four years before we beat Cork in Munster and yet I remember a couple of those years running into fellas in the street after we got knocked and them saying, “It wasn’t a bad year”.

That’s what it meant to be in the middle of a famine – expectations were lowered and there was a sense of stagnation about the whole thing. The worst of it was that people started taking moral victories and holding them up as something half-positive. Not to be proud of, exactly. Just not the end of the world.

I’d say there’s been plenty of that in Galway and Meath over the past 15 years or so. Lots of talk of resetting and going back to the drawing board and starting again. But for anything to change, there needs to be a build up of anger that becomes impossible to ignore. And to be very honest about it, I never heard a lot of that coming out of either county through those years.

We played Galway in an All-Ireland quarter-final in 2008 and Meath in a semi-final the following year and our main focus going into those games was to not get caught. All our talk was about not being complacent, about taking them seriously and doing a professional job. That’s how much they had diminished in our minds since that period around the turn of the millennium. It was a huge change in emphasis.

There were plenty of reasons why we kicked on and they fell back. Some of it was about age profile – we were coming into the start of a really good cycle whereas Galway were probably somewhere in the middle of one and Meath were nearing the end. When we got a hammering from Meath in 2001, the likes of Colm Cooper, Declan O’Sullivan, Paul Galvin, Marc Ó Sé, Aidan O’Mahony and Kieran Donaghy were all either still in school or not long out of it and none of them had played senior for Kerry.

Galway and Meath either just didn’t have that sort of talent coming through or they didn’t make use of what they did have. In Meath’s case, it was probably the former. But for Galway, you’d have always wondered why they weren’t getting more out of the under-21 teams they had.

Galway won four under-21 All-Irelands since 2002 – the same as Dublin. But Dublin have converted those titles into becoming the best team in the country. Galway haven’t even won Connacht since 2008. You can talk about population and money and whatever you want – Galway have had the raw materials but just haven’t got the best out of them.

Again, that can happen. All it takes is for enough people to accept it. Eventually, a couple of mediocre years go by and then a couple of genuinely bad ones and without anybody making a big fuss about it, a half a decade has slid by and nobody has done anything about it. By that stage, you’re starting at the bottom again and you’re overhauling structures and investing in coaching and all those things that you should have been doing when times were good.

For anything to change, there has to be anger. You could see it in Kevin Walsh when he was giving out during the league that his Galway players were being ridiculed for having no backbone. There’s a man who didn’t win his All-Irelands by accident. He wasn’t going to let Mayo stroll to a sixth Connacht title in a row. Anger was a starting point.

Anyone who was around Kerry in the mid- to late-90s would recognise that. The local papers at the time were vicious enough but local radio was worse. People would ring in on a Monday night and absolutely decorate the players. It wasn’t much fun at the time but it meant the thing reached a tipping point.

I remember getting phonecalls from people saying, “Are you listening to what they’re saying on the radio?” And I wouldn’t have been – deliberately. Like, what use was it going to be do me to hear any of it? There was no escaping it anyway in the heel of the hunt. The call would always come on a Monday night or Tuesday morning.

Friend: “Well, how are you holding up?”

Friend: “Ah Jesus, you got absolutely pulverised on the radio. You’re as well off not hearing it.”

Me: “Well sure, what use is it telling me then?”

Me: “Well, I’m glad we had this little chat. I feel so much better. Feel free never to ring me again.”

But at the back of it all, you’d have to say that it was that sort of environment and attitude in the county that ended the famine. The barren years became unacceptable. It meant that everyone really had to focus in on how this was all going to get turned around.

We don’t know yet if this is the start of something for Galway. One win can’t be expected to turn everything on its head. But we do know tradition counts for something. Once people in a county that has known success start sniffing more of it, the thing can grow quickly. If people in the county start rallying to the cause, then there could be a way back.

Tradition is like dry hay – it doesn’t take much of a spark to set the whole place on fire.