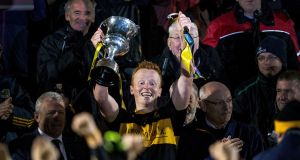 Dr Crokes’ Johnny Buckley breaks the handle of the cup after lifting it up. Photograph: Cathal Noonan/Inpho

It wasn’t supposed to be like this. Not this bad, anyway.

Few, if any, of the 3,055 who came through the gate in Mallow expected The Nire to be able to pull off a shock but the idea of them giving Dr Crokes a serious test seemed reasonable. Sadly for the Waterford champions, we had more confidence in them than they had in themselves.

The Nire froze here against a Crokes side that duly collected a seventh Munster title and their fifth in 10 years.

A merciless first half in which Daithí Casey tucked away a hat-trick and the Crokes midfield trio of Eoin Brosnan, Ambrose O’Donovan and Johnny Buckley cleaned house saw the Killarney side go in 3-9 to 0-1 ahead at the break.

After that, the second half consisted of nothing more than fulfilling the fixture.

“We were looking to get a fast start,” said Crokes selector Harry O’Neill. “We had given each of our lads a job to do.

“We had probably lines of the field that we wanted to get more out of by comparison with what he had got from them in the semi-final. We got all that today. We got a good performance from the team.

“When we got our chances today, we were more clinical. It was very pleasing. The Nire just didn’t seem to get to the pitch of the game. We were up and running early on. We had the chances, we took them. They had the chances to settle their nerves, they didn’t take them. ..”

For this to be a game, The Nire needed to score early and score often. Instead, they didn’t get on the board until the 21st minute, by which time they were already 12 points down. They actually fared pretty well in the early exchanges but were hesitant in front of goal and too often turned back to keep possession instead of going for scores. Against a threshing machine like the Crokes, there is a very limited future in that.

Brosnan is 36 and here he bossed the centre of the pitch like a man 10 years younger.

Crokes were 1-4 to 0-0 up inside 15 minutes and the former Kerry stalwart had the last pass for 1-2 of that total. Casey was enjoying himself too, putting the finishing gloss on a slick Crokes move for the first goal before slotting home a penalty for the second.

The Nire looked like they had been dropped in the middle of Times Square with instructions to hitch-hike home.

They couldn’t secure a kick-out, they couldn’t advance past halfway. Colm Cooper touched the ball just three times inside the opening 15 minutes but sliced them open for the first two goals.

When Casey stuck his third in the top corner on 22 minutes – a peach of a shot from 20 metres after more strong running from Buckley – the lead was already 14 points.

The Nire’s heads had long since dropped and any efforts to prevent further damage before the break had a token feel to them.

Trailing by 17 points, The Nire could aim for little more than a measure of face-saving in the second half. Dermot Ryan kept having a cut and finished with four points against his name and former Waterford hurler Liam Lawlor finished with two. It made no difference to the outcome but at least they kept at it.

Crokes are a quality side, all the same. Athletic and experienced throughout the side, with serious gas and quality off the bench in Micheál Burns, Jordan Kiely and Tony Brosnan. They go on to meet Corofin now – an inviting thought to tide us through the winter.