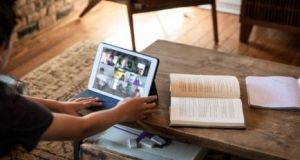 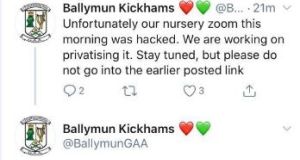 The GAA has told clubs to avoid the use of hit video-conferencing app Zoom after hackers targeted a children’s online training session with pornographic images.

Gardaí have been asked to investigate the incident, which happened on Saturday morning as Ballymun Kickhams coaches were preparing for a “nursery session” on the app, according to the north Dublin club.

Having exploded in popularity around the world as a means for people to meet online amid lockdowns as a result of the coronavirus pandemic, Zoom is coming under increasing scrutiny by privacy and data protection authorities.

A spokesman for Ballymun Kickhams told The Irish Times that the club has been advised to make no further comment, while the GAA has privately warned clubs that the incident may have “serious consequences”.

One source at the club said the online training session for children had not yet started when “totally inappropriate” pictures were posted to the club’s account.

The club spokesman would not say whether or not any children were exposed to the images.

But in messages posted to Twitter, which have since been removed, the club offered “sincere apologies” to those logged on to the “nursery session”. “Unfortunately, we were hacked, we hope that this did not cause distress to you or your children,” stated one since deleted message.

Warning ! A number of clubs have told us this morning that their Zoom accounts have been hacked. Clubs were using this platform for remote juvenile training sessions PLEASE be careful & maybe consult with someone within your club who has IT knowledge / experience #Zoom pic.twitter.com/aa0G3fVQB7

It is understood one line of inquiry is that the club was targeted by an overseas group with the stated aim of hacking Zoom meetings.

Earlier this week, Ballymun Kickhams posted to its Twitter account that it was using Zoom to continue team training, along with pictures of coaches using the app, under lockdown at their homes.

The club has suspended all online training on the Zoom app following the incident.

It is understood they are hoping to continue using technology to resume coaching of children at home while the coronavirus restrictions remain in place.

Following the incident, the GAA emailed a number of clubs warning against the use of Zoom and similar technology for virtual training.

“An incident occurred this morning that may have serious consequences,” the email to one club stated.

“These sites are not secure and should be avoided. Please bear with me while I seek advice on alternative methods, but in the meantime please advise all members to avoid them for GAA purposes.”

Separately, the Dublin Ladies Gaelic Football Association warned that the Zoom accounts of “a number of clubs” have been hacked.

In a message posted on Twitter on Saturday they said: “Warning! A number of clubs have told us this morning that their Zoom accounts have been hacked. Clubs were using this platform for remote juvenile training sessions. PLEASE be careful & maybe consult with someone within your club who has IT knowledge/experience”.

On Thursday, Zoom said it was shifting all its engineering resources on to security and safety issues as it dealt with a surge in new users, running into hundreds of thousands a day.

“We have fallen short of the community’s – and our own – privacy and security expectations,” said Eric Yuan, Zoom’s founder and chief executive. “For that, I am deeply sorry.”

Typically used for company meetings, people around the world have been turning to the app to meet online for school lessons, virtual “happy hours”, book groups and children’s playdates.