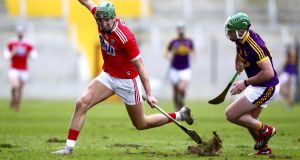 Cork’s Aidan Walsh is caught in the pitch while avoiding Wexford’s Darren Byrne during the Allianz Hurling League Division 1A game at Páirc Uí Chaoimh on Sunday. Photograph: Ken Sutton/Inpho

The Cork county board has postponed any further league fixtures at Páirc Uí Chaoimh until the pitch surface is at an acceptable standard and no longer presents an injury risk to players.

In the latest embarrassment to dog the stadium since its reopening it 2017, the cost of which is expected to overrun in excess of €100 million, the Cork county board today issued a statement admitting “the playing surface at Páirc Uí Chaoimh for last weekend’s Allianz Leagues games was unacceptable”.

There was a double-bill of games on Sunday, Cork footballers losing to Kildare, before the Cork hurlers lost to Wexford. The pitch surface was already badly torn up in advance of that second game, prompting widespread criticism.

According to the Cork county board, part of the problem stems from the development work itself, suggesting “the heavy pitch-side traffic, associated with the construction works for the new stadium build, has had a detrimental effect on the pitch”.

However, the problem clearly runs deeper, the advice being a complete pitch replacement will be required later this year.

“As was evident yesterday [Sunday], in winter conditions, the surface is likely to cut up badly. However, as weather improves the grass roots will develop and playability will improve dramatically,” say the Cork county board.

“The stadium team have engaged the Sports Turf Research Institute, who are international pitch specialists, to advise on the best way forward. Their preliminary results suggest a pitch replacement, later this year, will be required. In the short term, we will continue to use best endeavours to ensure the surface is kept to an acceptable standard.

“Our primary concern is player safety, and if an acceptable standard cannot be achieved we will not risk player injury by fixing games in the stadium.”

In the meantime, Cork’s next home game in hurling, against Clare on Saturday week, February 16th will now be played at Páirc Uí Rinn. “Thereafter, we will assess the pitch each Monday, in advance of the upcoming Allianz League games, and advise CCCC accordingly.”

Wexford hurling manager Davy Fitzgerald was one of those to admit the playing surface was far from ideal, part of the challenge in beating Cork on Sunday being to not let the pitch get in the way.

“We made up our minds that no matter what the surface was like,” he said, “you’re coming down thinking things will be pretty good, the stadium is incredible and I love it, so it’s a pity about the top of the surface.”