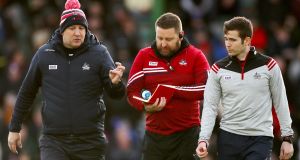 Cork had been enjoying a successful League campaign before sport was halted. Photo: James Crombie/Inpho

Cork GAA hope to be in a position to finalise their club competitions later this week. The county had deferred doing so until the blueprint for this year’s intercounty championships was available but that is now expected in the coming days, perhaps as early as Tuesday.

“We need the dates that Cork are going to be playing,” says county chair Tracey Kennedy, “because a week or two either way could make a big difference to our championship given our dual profile so we can’t really finalise our programme until we’re certain of the window that we’ll have to play it in.

“We haven’t been told when exactly that will be but our CCC are waiting to meet as soon as we get the information.”

The organisation of the championships will be facilitated by a streamlined decision making process that the GAA approved and sent to the counties. It reflects the position at national level, which was adopted by April’s remote special congress and provided emergency powers for Croke Park’s Management Committee.

Last Wednesday’s meeting of the Management Committee approved an interpretation of Rules 3.19 and 6.21 that allows county management committees the same powers in respect of their county championships.

“From a practical level that’s very important for us because with well over 200 on our county committee, it would be hard to manage. It’s well above what other counties have to deal with and while we’d have no problem holding a Zoom meeting, it’s not realistic with those sort of numbers – we’d have difficulty organising an indoor meeting that size.

“I’d hope the county board can meet before too long but in the meantime we can move ahead with our decision making thanks to the Croke Park motion.”

She says that the biggest challenge the county has faced in relation to its championships is the threat to its new competition format.

“We were introducing a new championship structure this year, which a lot of work had gone into, so if we can’t manage to continue with that it’s going to be very disappointing.”

The exigencies of this year mean that both Cork teams could have very truncated championships. The footballers are drawn against Kerry in a stand-alone Munster semi-final whereas the hurlers, who have had six matches in each of the past two championships, await their draw in the restructured provincial championship, which will not be in a position this year to adopt the round-robin format.

There is a possibility that both senior county teams might have short championships. Might that create space later in the winter?

“We haven’t made a decision on that because we’re waiting on formats for the intercounty competitions but there might be a flexibility there and there could be competitions where there are no county players involved.”

When news emerged that the GAA was preparing to complete this year’s Allianz Football League, nowhere would the news have been more welcome than in Cork.

Ronan McCarthy’s team were within a whisker of returning from the unfamiliar surroundings of Division Three when the campaign was abandoned in March. There had also been speculation that in order to expedite the 2020 championship, the GAA would simply ordain the same four divisions for next year.

That would have been bad news for a Cork team with the only 100 per cent and unbeaten record in the league and needing to do little more than cough to confirm promotion.

The Kellogg’s Cúl Camps, which will be in operation later in the summer experience such high demand from priority bookers on Monday that the system crashed for a number of hours.

Some Cork clubs had opted out of the highly popular scheme because of the onerous health and safety measures required but it is expected that camps will go ahead in the county.

Meanwhile, The Gaelic Players Association released details of a membership survey on Monday. Among the findings is that nearly a fifth of those polled had reservations about returning to play.

“While the majority of players feel it is safe to return, 17 per cent of players have indicated they may not do so. We will work to resolve the issues which you have raised; however, while Covid-19 remains in the country, there will remain some risk.

“We will respect the decision of any players who opt out of playing in 2020. Equally, we would call for understanding from county boards, managers, and supporters on this matter.

“We are committed to putting support structures in place for any player who makes this difficult decision, and we urge you to reach out to your GPA representative or directly to anyone on the GPA team.”

There was also “broad support” for an open-draw football championship if the chosen format, as appears certain, will be knock-out. Further, 76 per cent wanted the inter-county season to conclude within the calendar year.

1 Sebastian Vettel: This Formula One season could be my last
2 Lewis Hamilton: F1 title win would mean more due to Black Lives Matter
3 ‘Several’ players have withdrawn from snooker World Championship
4 Tactical test awaits Dettori and English King from stall one at Epsom
5 Limerick’s Shane Dowling forced to retire at 27
Real news has value SUBSCRIBE

FAI board gives green light to League of Ireland restart plan 20:13
Lewis Hamilton: F1 title win would mean more due to Black Lives Matter 20:02
Sebastian Vettel: This Formula One season could be my last 19:17
French Open set to allow 60% of capacity crowds in September 17:55
Tactical test awaits Dettori and English King from stall one at Epsom 16:09