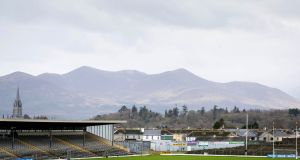 It was a compelling contest with Tralee appearing to have a good enough lead at half-time, leading by nine points (2-10 to 1-4). But by the end of the third quarter, St Brendan’s had kicked eight points without reply to close the gap to the minimum (2-10 to 1-12) and suddenly the Killarney school were on the cusp of completing one of the great Corn Uí Mhuirí comebacks.

The game appeared to turn on a line ball that the Sem turned over and Hayes fired over a superb point in the 49th minute. It also marked the introduction of Seán Kennedy from Annascaul, an underage soccer star who has returned from cross-channel.

From the kick-out Tralee CBS were awarded a penalty for a foul on their skipper Seán Quilter but his attempt was superbly saved by an outstretched leg of goalkeeper Eoin Moynihan. But in the ruck for possession, Quilter was fouled and he extended the Green’s lead to three (2-12 to 1-12).

It was game over in the 53rd minute when Darragh Reen found Hayes and Kerry under-20 corner forward scored his second goal with a clinical finish. He completed his hat-trick in the 56th minute when a shot from Fergal O’Brien ricocheted off a defender and Hayes was on hand to finish to the net and finally kill off the Sem’s brave comeback.

Tralee’s goalkeeper Devon Burns was superb throughout and made a couple of saves to deny Ryan O’Grady late on as they deservedly won their 16th Corn Uí Mhuirí and their first since 2007.

1 Keith Duggan: Bubba Wallace tweet shows just how troubled Donald Trump’s mind is
2 Jack Charlton’s own grievances endeared him to Irish fans
3 Jack Charlton: Tributes paid to ‘sporting icon’ and ‘father figure’
4 Capturing Irish hearts and falling asleep in the Vatican: Jack Charlton in his own words
5 Andy Moran on moving on from a Mayo career that glowed golden to the end
Real news has value SUBSCRIBE