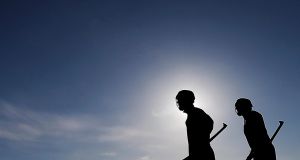 Opening group games in the Wexford and Dublin senior hurling championship are the pick of the first post-lockdown fixtures of 2020, as the GAA season re-emerges before strictly limited crowds and some continuing Covid-19 restrictions.

With the resumption of full club activity brought forward two weeks, to this Friday, the Wexford senior hurling championship is among the first to get underway with the meeting of champions St Martin’s against old rivals Oulart-The Ballagh. Cloughbawn also feature in that group.

It’s also the first of the live club broadcasts on TG4, which will continue over the coming months with one live game on the Friday night and one live on Sunday afternoon. On Sunday, the first of the Dublin hurling championship group games will be broadcast, when Ballyboden St Enda’s and Kilmacud Crokes face off in a repeat of the 2018 Dublin county final, won by Ballyboden St Enda’s.

“We are very grateful to the GAA and to the various county boards around the country who have been very helpful in preparing for the return of live coverage”, said TG4’s head of sport Rónán Ó Coisdealbha. “We look forward to providing extensive live television coverage from the GAA championships during the coming months.”

On Friday week, July 24th, TG4 will show the Limerick SHC meeting between Kilmallock and Na Piarsaigh, live from the LIT Gaelic Grounds (throw-in at 7.30pm) and on Sunday, July 26th, the live game will be the Cork football clash between Castlehaven and Carbery Rangers, live from Clonakilty with a throw-in at 2.30pm.

RTÉ Sport will then begin its live coverage of the club hurling championship with the Cork clash of traditional rivals Glen Rovers and St Finbarr’s on August 1st. The two clubs, who have won 52 county titles between them, will meet at Páirc Uí Chaoimh with a 7.30pm throw-in, live on RTÉ2.

Attendances of just 200 will be permitted on the opening weekend, and will have to include the teams, volunteers, officials and any media, but that figure rises to 500 from the following week in keeping with phase four of the Government’s revised roadmap on the relaxation of lockdown schedules, set for this Monday, July 20th

There is no entry to the field even for presentations and tickets must be bought in advance. Ulster club matches can also proceed, but without any spectators present in the immediate term.

There will be no water carriers but a water break will be taken between the 15th and 20th minutes of each half at the discretion of the referee when the ball has gone dead. Players are expected to bring their own ‘clearly marked water bottles’.

Referees are empowered to send anyone not observing these procedures outside of the playing enclosure and there is the special Covid-related offence: “Deliberately coughing in the face of an opponent may be considered ‘behaving in a way which is dangerous to an opponent’ (5.17 H; 5.19 F) - Red Card; Category III; one-match ban.”

Roscommon have also announced plans to stream games from the Roscommon club championship this year, a joint venture between Roscommon GAA and Nemeton, beginning with the clash of Clann na nGael and St Brigid’s on Saturday, July 25th, with a 7.0 pm start time.

It was also agreed by Limerick GAA that all their club championship matches are to be all-ticket affairs, where club action returns in earnest on the following weekend, July 23rd-26th, when there are 24 games scheduled across the top four tiers of club hurling.

The intention is the Limerick GAA ticketing system will help monitor attendances and would also play a crucial role were contact tracing were necessary.