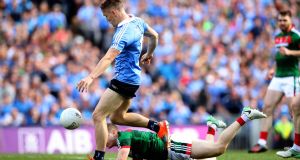 There is scarcely an English-speaking country in the world where one sport is so dominant, as football is in England.

From a situation even 25 years ago where cricket, rugby union, and rugby league were the recipient of blanket coverage at various times of the year (albeit with football already resolutely at the top of the inverted pyramid), England is now effectively a monoculture – the smallest football news will always appear on the back pages ahead of pretty much any blockbuster story from another sport.

But when was the last time an English footballer won the BBC Sports Personality of the Year award? David Beckham, in 2001 (Welshman Ryan Giggs won it in 2009, when he was the third- or fourth-best footballer on the Manchester United team). In all, only four Englishmen have won the award in its entire 63-year history.

The RTÉ and BBC awards for their sports personality of the year will be announced over the next couple of days. I should probably clarify that the RTÉ iteration is called the RTÉ Sports Person of the Year; it’s the British version that calls the eventual winner a “personality”, a distinction which those who take this sort of thing seriously have no doubt agonised over.

The RTÉ award has been going since 1985, and no Gaelic footballer has ever won it. Sean Óg Ó hAilpín and Henry Shefflin won it in the consecutive years of 2005 and 2006, but other than that it has been slim pickings indeed for Gaelic players.

I mention the lack of football winners in England to illustrate that it appears it is pretty difficult to do something extraordinary when your entire career plays out in the glare of the spotlight every year – not every second year, not every fourth year for an Olympics or a World Cup. How can you stand out, when you’re a part of the same sporting pattern year in, year out?

The other three English footballer winners were Bobby Moore in 1966, Paul Gascoigne in 1990, and Michael Owen in 1998.

All three of them won pretty much entirely on the back of brilliant displays at the World Cup, and Beckham’s win in 2001 owed much to his brilliant last-minute free-kick against Greece that qualified England for the World Cup the following year. In other words – the Giggs omnishambles aside – in 63 years the BBC has never given its highest personal accolade to a person for exceptional performance in their most-watched league.

Which leads us to the GAA. There are many perfectly valid reasons why the cards are stacked against a GAA winner of the RTÉ Sports Person of the Year award. As footballers appraised by the Beeb have probably noted by now, it is performance on a world stage that matters most . . . and GAA players just don’t have that opportunity.

That’s a circle that isn’t going to be squared, and for all the yearly caterwauling about these individual awards, I don’t think this is something that actually bothers too many people. But this year did provide a chance for a player from our national games to really stake a claim.

There are four mass-interest, mass-participation team sports in the country. And Con O’Callaghan has been a revelation – a devastating, whirlwind, full-scale, “shock and awe” revelation – at two of them in 2017.

He scored four goals in his first game in the Leinster club championship run that ended on St Patrick’s Day. He was Cuala’s magic-man, a once-in-a-lifetime talent for a team winning its first ever All-Ireland club title.

And goals – goals followed everywhere he went. In the All-Ireland under-21 final. In the All-Ireland senior semi-final and final. A man-of-the-match award in the Leinster senior final, when he kicked 12 points against Kildare. An All-Star. The Young Footballer of the Year award.

There won’t be many chances for a Gaelic footballer to win the RTÉ Sports Person of the Year award, and Andy Moran won’t either this year. But O’Callaghan’s relentless excellence throughout the year – a summer of soaring high achievement in football, bookended on either side by dominance with the small ball – was an ideal opportunity for RTÉ to reward what is a rare athletic prowess.

Achieving to the level he has achieved over the last 12 months is a startling effort. What is a sports person of the year award if it doesn’t seek to recognise the fundamentals of real athleticism – wins, class, and composure yes, but also speed, strength, versatility, adaptability, hand-eye co-ordination? They sound like the key ingredients of a winner in any sport . . . or two sports.

Katie Taylor is the bookies’ favourite. Joe Canning or Conor Murray would make fine recipients of this year’s bauble. O’Callaghan hardly needs another trophy, but he deserves this one.

Patrick Mahomes dominates quarterback duel as Chiefs top Ravens 08:58
Jürgen Klopp and Roy Keane clash over ‘sloppy’ comment 08:44
Liverpool make it three from three; South Africans to be a welcome addition to Pro14 07:42
Ballymun’s Dublin title one to savour for James McCarthy 06:00
Stuart Lancaster and Leinster ready to roll again at the RDS 06:00