Ciarán Murphy: Why are intercounty fans so pessimistic? 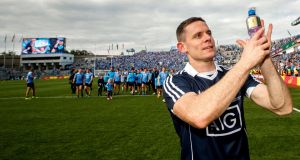 Dublin goalkeeper Stephen Cluxton. He is playing on perhaps the best team to have ever played the game – he’s not that busy for large parts of the season. Photograph: James Crombie/Inpho

I spent a hugely enjoyable couple of hours on a golf course with a Monaghan man of my acquaintance in May of this year. The topic of conversation inevitably fell to the upcoming Gaelic football championship, and I offered the suggestion that, with a couple of breaks, Monaghan could go further than any of the other Ulster teams in the championship this year.

My companion laughed condescendingly in my face, and proceeded to tell me precisely everything that was wrong with Monaghan football, and that the absolute best they could hope for was a creditable quarter-final defeat. He painted this prospective Monaghan defeat in the last eight as the answer to his prayers, as a near miracle.

He continued: “But Galway, on the other hand... now there’s a team going places”, which prompted a barrage of cruel, mirthless laughter on my part. We must have passed five or six holes in this fashion, casting aspersions, rating and ruling out various players, and generally being pessimistic about the chances of our native counties ever winning an All-Ireland in our lifetime.

I felt a great oneness with the life-force of the Gael on that day. This is how it should be. Two supporters of Division One teams, one of which has been a mover and shaker in the Ulster championship for the last six years, the other clearly on an upward curve with a pedigree of underage success (and a reigning provincial champion at that time, lest we forget) snorting derisively at the chances of us ever gaining happiness from their exploits.

This has been for over 100 years the default position of the intercounty supporter. Where club allegiances run deep, and are more often than not wonderfully, magnificently, soaringly biased, the relationship with one’s county team can often be a more conditional affair.

I heard an old fella walking out of Croke Park after Galway had won their near-universally acclaimed “saviours-of-football” All-Ireland in 1998 saying “t’was the softest All-Ireland that was ever won”.

This September I got a text message from a Galway woman watching the game at home with her dad who, after having slated Joe Canning for years for not winning an All-Ireland, waited until after the 6.01 news was over on September 3rd before questioning how it was, if he was as good as everyone was saying, that he only had one All-Ireland medal (apparently his animosity towards the Hurler of the Year dated back to a suspected low blow on a neighbour in a club game 40 years ago. By Joe’s uncle).

But there’s no doubt things are changing. The fevered reaction to Stephen Cluxton’s omission from the All-Star team last Friday is symptomatic of a more partisan atmosphere that has been building around intercounty GAA in the last few years.

Maybe Cluxton did deserve the All-Star, and maybe it is a little weird he hasn’t won one since 2013, but it’s just hard for me to get too worked up about it. He is playing on perhaps the best team to have ever played the game – he’s not that busy for large parts of the season. David Clarke is a pretty brilliant goalkeeper.

Maybe it’s a little weird too that a Dublin man didn’t win Player of the Year for the second time in a row, but again Andy Moran had an exceptional year.

Maybe Dublin are getting punished for not playing enough games against teams of a sufficient quality to really test them, but they’ve won the last three All-Irelands. As consolation prizes go, that’s not too bad.

The fact that both of those awards were won by Mayo players ahead of Dublin players might also stick in the craw because they and Mayo fans have been not shy of getting into it with each other in recent years, to the credit of neither of them.

Ken Early of this parish, and a co-host of mine on the Second Captains podcast, has been getting some blowback from Manchester United fans recently for his criticism of José Mourinho. I’m a Man United fan, and I haven’t disagreed with a word he’s said about him. But what always strikes me as odd is the presumption that if you criticise a team, it’s because you hate them. I’ve usually found that I spare my most biting words for the teams I support. They’re the ones that really anger me, not the other lot.

Regrettably it appears sports fandom globally now requires a blanket refusal to accept criticism of your team or to let a perceived slight go unacknowledged. That was one thing Trump fans learnt from their local sports team. No argument is too daft, no position is too indefensible, if it’s in pursuit of a win for your side.

Maybe this level of partisanship always existed, but if you heard it in the clubhouse or at the bar counter calmer heads usually prevailed on these people. Twitter and Facebook have weaponised those opinions, and they’ve found plenty of like minds. The GAA doesn’t have a major problem with this yet, but we should jealously guard our birthright – a relentless, grinding, spirit-crushing pessimism about our football and hurling teams.