Ciarán Murphy: What happens on All-Ireland day reverberates for life 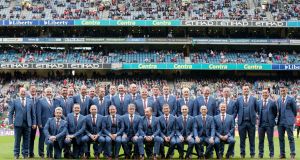 The 1991 All-Ireland winning Down team at Croke Park this month. Photograph: INPHO/Morgan Treacy

There comes a time in every GAA fan’s life when they look at the jubilee team being presented on All-Ireland final day and realise “these are not old men, I remember these guys, what the hell are they doing out there instead of the jubilee team?”

So I found it quite frankly preposterous that the Down team of 1991 was being paraded out at Croke Park on Sunday. It couldn’t possibly be 25 years since my first trip to Croke Park for an All-Ireland final, and yet there was the evidence before my eyes.

They were the first team I ever loved. I had a regard for the Meath team of that era, of course, but that day I was sitting “upstairs” in the old Cusack Stand, down very close to the Hill, and so was given a bird’s eye view of the most extraordinary sea of red and black at that end. And they had James McCartan, and Mickey Linden, and Peter Withnell. What more could a kid ask for?

I was standing on the concourse in the Cusack Stand last Sunday when their images came up on the screens on the wall, and I started telling the story to my friends of how my Dad had told me on the Friday night before that I was going to the 1991 All-Ireland football final.

And how he subsequently told me on the Sunday afternoon, about 25 yards from the gates into the Cusack, that he didn’t actually have a ticket for me and that if the man at the gate started giving us grief, I was to start crying. “That won’t be a problem Dad.”

And then I realised that not alone is the Down football team of the early 1990s now a relic of auld decency just the same as all the other jubilee teams that I would’ve seen being presented to the crowd growing up, but that I belonged (however briefly, and as it expired) to an era that allowed nine-year-olds into All-Ireland finals to sit on their parent’s knees.

It seems like the sort of thing parents did with their children to allow them see Christy Ring in action, or something, but there it was, still going strong in 1991.

It’s a beautiful, powerful thing that on All-Ireland final day the winners from 25 years before are presented to the crowd.

And 25 years seems like a decent spell for time to have its way with a group of 20 or 30 men. You’ll see the lads who kept themselves well, the lads who let nature take its course around the gut area, the sadness of a young teenager standing in their dad’s position.

You’re an All-Ireland final winner, and no one can take that away from you. And you’re also linked with these other men, by hook or by crook, for the rest of your life.

I was always struck by that quote of Liam Griffin’s after the 1996 hurling final when he said to his Wexford players that this would be the last time that group of people would ever be in the same dressing-room together, that someone will retire, someone will be dropped, and that’s just the way of things in team sports .

We say, of course, that what happens on All-Ireland final day reverberates for the rest of your life – but in the case of draws that’s not really strictly the case.

I can barely remember anything from Galway’s drawn game with Kerry in 2000, but the replay is stuck in my head.

Levelling points take much more courage to go for than points to win a game, but if Dublin win the replay and Cillian O’Connor doesn’t play well, how many people will still be talking about that point, which should in truth go down as one of the great All-Ireland final scores of all time?

Domhnall O’Donovan’s point in added time to draw the 2013 final for Clare was an extraordinary moment, but Shane O’Donnell is that year’s All-Ireland final hero.

Joe Canning hit a nerveless free in the dying seconds of the 2012 All-Ireland final to draw the game, but it’s been forgotten about.

And if the Mayo players hardly need reminding of what’s at stake every time they play in an All-Ireland final, the jubilee team serves as a reminder to the rest of us that excuses fade, extenuating circumstances are wiped from the record books, huge chunks of luck (good and bad) are disregarded, and all we’re left with is 30 middle-aged men waving to the crowd as winners.