Ciarán Murphy: TV a factor for teams lower down the food chain 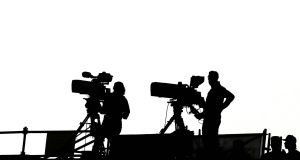 In the past the FAI has tied its broadcast deals for Irish international games to coverage of the domestic league. That’s just good business. You get to show the games that get the big audience, but you have to do us a favour too

A year-round organised calendar of fixtures might be beyond us in the GAA, but luckily when it comes to pub talk there is no off-season. And most of the (non-umpire-related) debate around the games so far this year – the football championship being overshadowed, Offaly’s relegation to a lower tier of hurling – is actually about television.

For an organisation that defines itself explicitly as a ground-up, grassroots association eschewing the poisonous influences we see everywhere in professional sports, we are a little obsessed with the gogglebox.

If Offaly think they’re good enough to win the Liam MacCarthy Cup next year they have a better chance of doing it from the Joe McDonagh Cup than they do from the Leinster Championship. Perhaps the problem they have with relegation from the Leinster Championship is one of perception – would they rather have the nation watching as they lose heavily to Kilkenny than to win by a couple of points in Portlaoise against a team at their level to a chorus of shrugged shoulders? We should be careful to understand the reasons why that isn’t as clear cut as it seems.

When you hear managers of Division 3 and Division 4 football teams talk about lip-service being paid to their efforts it is hard to escape the possibility that they might not be talking about much more than the fact that they only get three or four minutes worth of coverage on the Sunday Game, and cursory analysis from people for whom it was just physically impossible to watch the game in the time allotted between the end of the game and the start of the TV show.

For those managers, and their players, their motivations for representing their counties are about more than that, of course – given how little they are seen on television currently there has to be much more to it. But it’s probably time we started asking ourselves why they place such importance on the idea of press coverage generally, but television specifically.

I don’t necessarily think that we should all presume to know this, by the way, but that’s certainly how it feels to me. And it seems as if any redrawing of our competitions needs to recognise that commensurate levels of TV coverage is a necessary spoonful of sugar to make the medicine of a tiered competition go down.

Maybe there’s a refusal at GAA level to admit that television is as important as it really is to squads lower down the food chain. But when we spoke to Daniel St Ledger of Carlow last year ahead of their match against Dublin, there was absolutely no doubt that his first live televised game in a decade-long senior intercounty career was a big deal.

He was about to head to training to record the “walk toward the camera” shot used during the team line-ups, the same one he sees Harry Kane do on Sky Sports… and what’s not to love about that?

In the past the FAI has tied its broadcast deals with television companies for Irish international games to coverage of the domestic league. That’s just good business. You get to show the games that get the big audience, but you have to do us a favour too. The audience for one is not going to match the audience for the other, but we’re in business to do business, so make it work.

So perhaps in all of this there’s a possibility of the GAA, television companies, and teams in the Joe McDonagh Cup, Christy Ring Cup and the as-yet unnamed and undecided-upon tiered football championship getting around a table to work out a schedule that works for them.

Anthony Nash’s comments in the aftermath of Cork/Limerick last weekend about how he wants to see more Saturday night games is indicative of a major sea-change in thinking – up until very recently many would have blanched at the idea.

Unless the GAA, RTÉ and Sky fancy some target practice on their metatarsals, the current broadcast deal will surely be renegotiated this winter. A little bit of lateral thinking in those discussions could have a major impact – maybe Offaly wouldn’t have quite so much of a problem with relegation if they could be assured of live coverage on Friday nights for Joe McDonagh Cup games.

There are obstacles to making that work, but we won’t know if we don’t ask. Recognising TV’s influence is a good start.