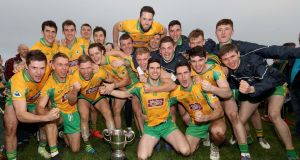 Corofin players celebrate their five-in-a-row success in Galway. But only one of the team started for Galway against Mayo in June. Photograph: Bryan Keane/Inpho

Watching St Martin’s celebrate their Wexford senior hurling final win over Oulart-the-Ballagh on Sunday, it was difficult not to be a little envious of the players and their supporters. What a time to be alive – not just a county final win, but a first win in nine years, and a win over the undisputed “big dogs” of the county too.

Since St Martin’s last win, Oulart-The-Ballagh had won eight of the last nine Wexford finals. So to win a county title by taking them down, and in a final too, brooks no argument.

Winning a county title of any stripe is a sweet moment, but given the option, you’d like to win it by beating the best. You’d accept the alternative, obviously, but that’s the way you’d dream it – with a late scoring burst that blows them away, as Martin’s did on Sunday in Wexford Park.

There are a few county championships that could do with similar epiphanic moments. Ballygunner won their fourth Waterford final in a row on Sunday, as did Thurles Sarsfields in Tipperary. In football, Corofin sealed their fifth Galway title in a row on Sunday week last, Castlebar secured a three-in-a-row in Mayo last Sunday. St Brigid’s won their seventh Roscommon title in eight years on the same day.

Even in the most viciously competitive counties, Dr Crokes won their fourth in six years in Kerry on Sunday, and St Vincent’s are going for four in five years in Dublin next Monday night.

In Corofin’s case, they have been the dominant team in Galway club football for three decades, but it’s only in recent years that they have become serial winners. For quite a while after they won the first of their 16 titles since 1991, they had an endearing habit of taking a year off between wins.

Since 2008 however, they’ve only failed to win the county title on two occasions, and a sense of inevitability has fallen over the county championship. Five in a row has every chance of becoming six in a row next year, and all the rest of the county can do is look on enviously as they continue to produce smart, well-drilled, ruthlessly effective teams.

But it’s interesting to note that there was only one Corofin and one Castlebar player on the Galway and Mayo teams that started in Pearse Stadium in June of this year, and in the Connacht final in Salthill the following month, there were only two St Brigid’s men on the Roscommon team that lifted the Nestor Cup.

St Vincent’s might be the best team in Dublin club football, but they didn’t even have one starter on the team for the All-Ireland football final. Dr Crokes are the reigning All-Ireland club champions, but only Johnny Buckley started for Kerry in their last game of the championship, against Mayo in the All-Ireland semi-final replay.

Only one – Aidan Harte of Gort – of the 18 Galway men to have seen action in the All-Ireland hurling final in September is still in with a chance of winning a club title, and there are five teams still left in the competition.

A successful, dominant club team used to be the foundation stone for a successful county side, but not any more. It used to be the case that inter-county teams were picked based on players’ form in club championships, which led regularly to county champions having seven or eight players on a county team.

But as the physical demands of the inter-county game becomes more and more divorced from the level required to play club, county managers are now much more likely to pay attention to the Sigerson or Fitzgibbon Cups, and the few lads that might be playing at that level yet to make it to an inter-county setup, than they are to the county’s club championship.

The starting point for inter-county managers now isn’t simply selecting the 30 most talented players they’ve seen in the county championship – it’s a more ephemeral mix of application, physical attributes, commitment to a lifestyle, and, yes, natural ability. Fellas like that can be found from everywhere and nowhere, not just in the county champions’ dressingroom.

Maybe a few of the St Martin’s lads seen deliriously celebrating at the end of the game on Sunday will receive a call-up from Davy Fitz based on their club performances, but the relevance of those heroics to the big show in the summer-time seems to be less and less as the years progress.