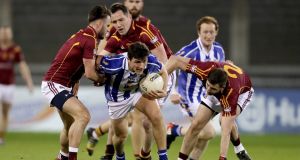 Ballyboden’s Colm Basquel in action against Oliver Plunkett’s Eoghan Ruadh in the Dublin SFC at Parnell Park. Their defeat ensures Ballyboden’s championship season is over before May. Photograph: Tommy Dickson/Inpho

For a change, the farce that sees one of the eight or 10 best club sides in the country out of their championship before May has arrived wasn’t even the most controversial thing about that fixture.

There was also looming over the tie an argument over whether Ballyboden’s under-21 Dublin players would line out, given they are playing an All-Ireland final this Saturday against Galway.

In the end, Shane Clayton and Colm Basquel both saw action, but listening to Conal Keaney speaking on joe.ie’s GAA podcast, recorded on the morning of the game, he still wasn’t sure the game was going to go ahead at all given the under-21 farrago.

That’s a pretty extraordinary way for you to prepare for what was potentially (and is now actually) the only serious football game Keaney will play in 2017.

Once Dublin won their All-Ireland under-21 semi-final against Donegal, the predictable call came to postpone the club games. That the Dublin County Board didn’t is to their credit.

As Anthony Moyles, the former Meath captain who is now a key member of the Club Players Association put it on Twitter: “makes a change. At long last the majority not being dictated to by the few”.

Arguing over the position in the calendar of the under-21 championship is a moot point, as this is the last year of the competition. But a discussion about the merit of playing two rounds of the Dublin senior football championship in April and May, before it shuts down entirely for the summer is very much a debate worth having.

It was interesting to read the CPA’s latest press release regarding their stated plan to ‘fix the fixtures’ for their members. There’s so much sense being talked that it’s perhaps unfair to single out the one paragraph I have major issue with, but they suggest as one of their key principles of fixture planning that “club players must have regular league and championship matches during the period April - September”.

That round of football scheduled for last week was the reason every Dublin senior club footballer was training all through January and February. There’s not much point in tapering your training to make sure you’re at peak fitness in October to play county quarter- and semi-finals if you’ve been knocked out in the first round the week after Easter.

That was the truly unfair part of what happened last week.

Club players shouldn’t be forced to be ready to go to war in April and May, before then being asked to maintain that level of fitness throughout the entire, game-less summer, until the Dublin senior team are knocked out of the championship.

It will happen in a lot of other counties too over the coming weeks, but the everyday injustice of that is overshadowed by the more eye-catching, but no less unfair, ‘club v county’ debate that the Dublin under-21s had to handle over the last week.

We’re constantly being told that there just aren’t enough weekends in the year for the GAA to run off their fixtures. Sometimes the answer is right in front of your face. What high-profile games are being played between now and the middle of May?

Go through the counties and count the number of weeks between their last national league game, and their first championship game. Some of those numbers are staggering. 9 weeks for Cavan. 10 for Roscommon. Even in a province with 11 teams competing, 9 weeks of inactivity for Offaly.

Handing county players back to clubs for 14 days at this time of year is a farce. The idea that they can compartmentalise their thinking and be fully committed club players, when all winter they’ve been training with the date of their provincial championship first round game in mind, is nonsensical.

Instead of asking for a calendar of games throughout April and September, what would truly serve the club player best is to say that your first championship game is in August, and there will be no interruptions due to inter-county activity between then and the end of your club championship.

The All-Ireland finals have already been moved forward – move them another couple of weeks to the start of August and the club players’ schedule becomes much clearer. Start training in May, play a few rounds of the league in late June and July, with or without your county stars, and after the All-Ireland finals, the stage is yours.

Elsewhere in the CPA statement released last week, they talk about getting a correct ratio of training and games, nominated free weekends so that players can plan holidays, a close season . . . these are all absolutely vital.

But the answer isn’t in the tokenism of club activity at this time of year, and it’s not in passing intercounty players back and forth from club to county like a hot potato.

It’s in separating the seasons altogether, for everyone’s benefit.