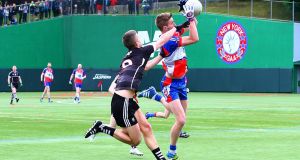 The annual jaunt to New York is becoming more and more fraught for teams in the Connacht senior football championship, and, for now at least, we’re not even talking about the threat presented by a man who would fire his own FBI director.

There’s little doubt Sligo deserved their win last Sunday night in the Bronx, but the build-up had been marked, it seemed, by a greater recognition than ever of just how stern a test New York were going to provide.

Fourteen of their players had played inter-county football of some kind, we were told in the run-up to the game, and they boasted Tom Cunniffe of Mayo, and former Dublin hurling All Star Danny Sutcliffe in their ranks this year too, as well as Ross Wherity of Donegal, and Conor McGraynor of Wicklow, who kicked a point in the last minute to win the Sigerson Cup for a star-studded DCU team in 2015.

The mere fact that Carew’s dire warnings beforehand found a willing audience in the media and in his own team’s supporters surely girded Sligo’s collective loins – a trick that managers of teams who are prohibitive favourites have been trying to pull on their own players for years.

When New York took the lead for the first time with 19 minutes remaining, it seemed like all the discussion about the likelihood of a shock result was well merited. To their credit Sligo took control from there, and ended up winning the game by eight points. It seemed like they had come prepared for a challenge, and when that challenge presented itself they were ready to answer.

Speaking afterwards, Sligo manager Niall Carew said: “They were a solid team coming in but they talked themselves up quite a bit. That can go two ways. A lot of our lads were coming in after playing in Connacht finals and have a medal. New York probably didn’t think of that and showed a little bit of disrespect going into the game.”

We spoke to Sligo’s former All Star full-back Charlie Harrison on our Second Captains podcast on Monday afternoon and he gave a slightly more nuanced take on why people – the media, GAA figures in New York, Sligo’s own fans maybe particularly – talking up the exiles bothered them quite so much.

“Just the way things were built up in the media this year, it seemed like there was more pressure piled on us than any other game I’ve nearly ever played in. It felt like everyone wanted us to lose.”

Sligo are not used to being the favourites, the overdogs. If there’s a tale of romance in the GAA championship involving Sligo, they’re usually the ones who walk away with the girl.

I don’t think it’s disrespectful for people to suggest that your opponents are a good side; indeed Carew said exactly that on Newstalk last week, when he said: “If New York beat us on Sunday, it certainly won’t be an ambush. We know exactly what we are heading into.”

You can’t talk your opponents up before a game, and then give out to the media for agreeing with you afterwards!

The mere fact that Carew’s dire warnings beforehand found a willing audience in the media and in his own team’s supporters surely girded Sligo’s collective loins – a trick that managers of teams who are prohibitive favourites have been trying to pull on their own players for years.

And if New York did talk themselves up a bit, they can hardly be blamed – they’re surrounded on all sides by Americans, after all . . . and not just Americans, New Yorkers.

I can only imagine how incongruous a “we’ll do well to keep the ball kicked out to them” approach to anything would seem in your typical Manhattan office block.

And it’s only natural too that when you don’t play any challenge games, are surrounded only by the quality that’s in your own group, and preparing for a once-off event in your back yard, that you’d convince yourself you were in with a great shout – that’s what sportspeople do.

All that ‘disrespectful’ talk led to a huge crowd, a brilliant atmosphere, a thrilling game, and a live radio broadcast on RTÉ Radio One from Gaelic Park which was hugely enjoyable.

Having spoken to Johnny Glynn last year in New York as he prepared for the visit of Roscommon, it became clear that this fixture is obviously a strange one, an Irish answer to an Irish question, but also, as I wrote here last year, “one of those curious incongruities of GAA life that we might be better off good-naturedly accepting, rather than subjecting to too much investigation”.

That acceptance might not be so easily gotten if New York start beating teams regularly in the Connacht championship, but for all the talk this year and in previous years, they still await that first win.

Leitrim are next up to the plate, and obviously they’ll go through some of the same contortions in the press about being both aware of the threat and feeling disrespected by the recognition from outside their group of that threat.

But it’s still a beautifully offbeat way to start a championship, and if it’s less of a formality than it used to be, well that’s all the better.