Increasingly familiar-looking top table was upset by the Wicklow side 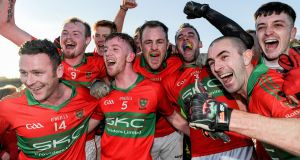 Ah, we didn’t want to go to the stupid World Cup anyway. And as for hosting the rugby version, having a rag-tag collection of old British colonies dropping by and wiping their feet on the welcome mat was more trouble than it was worth in the first place, surely.

So it behoves us instead to focus on the sorts of moments that happen in sport that can put a smile on your face . . . because we did once smile at these foolish pursuits, remember (it was last Saturday, when the rugby team won, and the soccer team contrived not to lose the first leg)?

It’s still been, on the whole, a pretty good week of sport for the people of Rathnew, who I’m sure were better able than most to blithely accept our various on- and off-field disappointments in the last 36 hours.

They are so inclined because of their extraordinary win over Dublin champions St Vincent’s in their Leinster quarter-final in Aughrim last Sunday, a result which sent shockwaves through the increasingly familiar-looking top table of the All-Ireland senior club football championship.

Couple that with Moorefield’s surprise, but fully merited, win in Portlaoise against the home side, and Sunday represented a shuffling of the deck which was badly needed after an uninterrupted run of wins in Leinster for Dublin teams dating all the way back to the winter of 2011, when Garrycastle of Westmeath beat St Brigids in the provincial final.

So how, exactly, did the events in Aughrim happen? We were talking to Leighton Glynn on Monday and he laid it out pretty succinctly. “We’re used to winning in Wicklow, so it shouldn’t be any different when you step out of the county. For the last two weeks we honestly believed we were going to win the game – it’s not arrogance or ignorance.

“We got a good look at Vincent’s, we saw the [Dublin] semi-final on TV and the management went up to Parnell Park for the final, and we just thought teams tended to step off them too much, concede kickouts, let them build and play their football.

“We just wanted to push up, go man-to-man, and make it as difficult as possible for all their players. They’re a really stylish football team – Ballymun couldn’t get a hand on them, but they [Ballymun] were playing too defensively we thought.

“That can happen. We find it in Wicklow as well, teams tend to play defensively against us, maybe its just natural. If we played it 10 times, Vincent’s might win it nine. [But] we couldn’t change our tactics in two weeks to play defensively – we never play that way so we’d be at nothing doing that. We played some fantastic football, at times Vincent’s struggled with us. The longer it went on, our lads were getting taller, and had their chests out.”

And when you look at it from Rathnew’s point of view, it starts to make sense. If you’ve ever been part of a team that is full of confidence, training well, and, perhaps most importantly, hasn’t played a game in a while, you’ll be familiar with the sense of delusion that gradually seeps into a team’s core – “we’re brilliant”, “no other team has options like this”, “we’re unbeatable”.

The delusion that you’re training better, harder and more effectively than everyone else becomes a self-fulfilling prophecy. Just by virtue of believing it, it’s half-way to becoming the truth. If you’re not playing games, no external reason to doubt yourself is forthcoming.

Rathnew have won four of the last five Wicklow championships. They’re the dominant force in club football in the county. Every time they take the field, they’re favourites. Rathnew being massive underdogs last Sunday came as absolutely no surprise to anyone . . . except their players and managers. They hadn’t played at this level, at a level where they would be underdogs, in two years.

And that’s why Rathnew beating Vincent’s is a brilliant, heart-warming story, but it’s nowhere near as big a shock as, for instance, Dublin losing to Wicklow in next year’s Leinster championship.

When the time came last Sunday for Rathnew to drive for home in the last 10 minutes, they knew what to do, in a way that only seasoned winners can know. They made a decision to be positive in their tactical set-up, and their players not only accepted that, but bullishly bought into it – hell, they probably demanded it. “Why wouldn’t we have a crack at these guys?”

In the same way that losing can become institutionalised in a team’s psyche, so can winning. No one in their group bothered to tell the rest of them about the gap in class and pedigree, so maybe it never existed in the first place. And if that sort of story doesn’t turn your frown upside down this week, then I don’t know what to tell you.