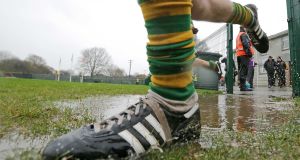 Club players really can walk away whenever they like, and they do. Photograph: Morgan Treacy/Inpho

This has truly been the club players’ winter of discontent.

The launch last week of the Club Players’ Association was followed in short order by the release of a contract, to be signed by every member of the Dublin club St Brigid’s senior panel, which asked quite a bit of the signatory.

For those of you who didn’t see the St Brigid’s contract, it laid out basic standards of behaviour in the squad, including punctuality, positive attitude, and the wearing of correct gear to all matches and training sessions. The ‘clause’ which banned all holidays unless agreed in advance with management certainly raised a few eyebrows.

It was leaked last Monday, and thoroughly lampooned by all and sundry in short order. It was held up by many as an indication of just how necessary the Club Players’ Association is.

In reality, it was just another in the long list of club issues that should have been dealt with long ago, but which have been allowed to fester to the extent that we find ourselves in a situation where amateur club players are being asked to book holidays around a fixture list that doesn’t exist, with their manager standing over them as they enter their passport number into the Ryanair website.

There is certainly an element of the club player being taken for a fool in all of this. Anyone who would ever hand over their travel plans for the year to a manager needs their head examined.

And never mind St Brigid’s – I’m sure they’re not the only team with a contract of this nature, and even if teams don’t have an actual piece of paper for players to sign, a lot of this is taken for granted in club squads in any case, including pressurising people into changing, cancelling or shortening pre-booked holidays. That’s been going on for years.

It’s a familiar refrain when intercounty players start complaining about their lot – “it’s their choice, they can walk away any time they like”.

The average intercounty player has some skin in the game too though. His profile might have gotten him a college scholarship, or a job, or a coaching position with a club or in their county.

I’m 34, and in a position where travelling back and forth to Galway to play junior football is just too time-consuming. I’m also a physical wreck, a hater of gyms, and a trainer of dubious commitment.

So I recently let it be known that this prize asset would be interested in joining a club in Dublin, to play what I would term ‘social football’ – a standard, let us be clear, where my holiday plans are definitively my own.

I was soon informed that St Vincent’s recently launched a team for ‘social footballers’, and that this team would play in Division 11 (!) of the Dublin football league. I had to ask myself – what about divisions 5-10? Are they not social too?

I had my own brief spell as a committed club player, and played for a team that got to a county final, so we must have been doing something right.

But I always felt that my commitment to the cause was total while I was training and playing, and that once outside the dressing-room, my life was my own. I know that many of my team-mates thought likewise.

Dedication to your club is a personal choice, and if someone puts a contract in front of you that demands 300 per cent commitment to the cause, then I’d suggest you sign that, and then immediately throw it in your mind’s dustbin without delay.

Club players really can walk away whenever they like, and they do. They take years off, they go back to training late, they make allowances for changes in their life circumstances, they’re coaxed back out of retirement after a string of bad results.

The coaching trick from there should be about taking all of these players with different levels of commitment, fitness and preparedness, and gelling them into something capable of success. That takes rather more managerial imagination than drawing up a list of do’s and don’ts for grown adults, which they must adhere to, or be banished.

I’m not entirely sure that as club players we need the Club Players Association to fight our corner on individual instances of overtraining or unfair demands on players. Finding a work-life-GAA balance is very much an individual choice, and if you’re a club player putting the GAA ahead of work or your personal life, then you don’t need a CPA membership card – you need a mirror.