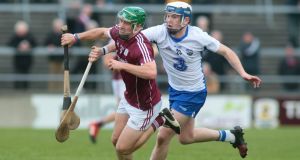 We filed into Pearse Stadium last April feeling a little swizzed, to borrow a phrase from Brian Kerr.

It was one of the those rare occasions where the Galway footballers and hurlers were sharing a billing but it was only on the day before that it became clear that not alone would Kildare (already promoted to Division One of the football league) be fielding an understrength team, but that Waterford would also be making wholesale changes for their hurling league quarter-final.

It took the sting out of the build-up, for sure. In the end, the footballers only won by a point, and the hurlers came from 10 points down to win by a goal, so we got plenty of bang for our buck. But the question was inevitably asked afterwards – what did we learn from it all?

As it turns out, quite a bit.

There’s a fair argument to be made that Galway’s season turned on the last 14 minutes of that game, when they came back from seven points down to win by three.

Without that late surge, there would have been no defenestration of Tipperary in the league final, and nothing for Galway to hang their hat on going into the championship, just two dispiriting home defeats in the only league games that really mattered – a quarter-final, and the earlier Division 1B game that ended up deciding promotion against Davy Fitzgerald’s Wexford.

It told us quite a bit about where Derek McGrath’s head was at too, of course. At the time there was plenty of criticism coming his way – effectively turning up his nose at a league quarter-final, when the Waterford trophy cabinet isn’t exactly overflowing with trophies of any kind.

A few days after that game, he lost the man who got both goals in Pearse Stadium that day, Tom Devine, and he was later moved to try and quash any rumours of discontent in the camp.

He let Devine go travelling for the summer with a heavy heart, but the comments he made at the start of May suggested he had heard a lot of nonsense between Devine announcing his decision and the start of the championship.

“Tom said it was holistic, it’s career-based, and the rumour mill, the rumblings that he didn’t get on with us, that’ll continue. But the truth is very different – you saw that in his own words.”

The criticism continued into the summertime with that limp exit to Cork in the Munster semi-final. And in reality, for all the success that McGrath has led them to, he has had an up-and-down relationship with the Waterford public.

He is an extraordinarily easy scapegoat when things go wrong, as they have done at times throughout his tenure – the 5-19 to 0-13 loss in the 2016 Munster final for example, or the game against Cork in Thurles this year.

His teams suffer aesthetically in comparison to the Waterford teams of the previous decade (what team wouldn’t?), and at their worst they can appear over-coached, wooden and negative. That’s why defeats like the one in Pearse Stadium in April don’t just get shrugged off. McGrath has, up until now, not had much in the way of wriggle room.

Many analysts have said Waterford have evolved their game over the course of the last 12 months, and the semi-final display against Cork was the natural culmination of that evolution.

What might be closer to the truth is that the plan hasn’t evolved, but the players’ ability to play that plan has evolved. I’m not entirely sure that there was a change to the system for the Cork game earlier this month, but what had changed was the discipline with which the players used the ball out of defence and in the transition to attack. That makes Waterford a crushingly difficult proposition for Galway on Sunday.

Whatever about the psychological damage that defeat to Waterford in Salthill in April would have done, Galway took other lessons from that game.

They were carried to victory on the back of sterling performances from Conor Whelan, Joe Canning and David Burke, and if those three play well on Sunday, Galway will win. Burke’s performance against Tipp in the semi-final was uncharacteristically nervous – the smart money is on a return to form on Sunday.

We also saw in Salthill that day a refusal to panic in this Galway team – a certain steadiness to this squad that hasn’t been there before. They have been favourites for the Liam McCarthy ever since that league final win over Tipperary, and they’ve embraced it. Winning that classic All-Ireland semi-final, in the circumstances in which they won it, will embolden them further.

Nothing has defined these counties over the last 25 years quite like the losing of big games. The fact that one of them has to end the season as champions has left them both staring in the mirror asking – why not us?

In retrospect April gave us a few straws in the wind, but everyone involved in both camps realise that next Sunday might define the rest of their hurling lives.

1 Gerry Thornley: Home and away Six Nations could be its ruination
2 Saudi Arabia-funded takeover of Newcastle United in serious doubt
3 Decision expected next week on staging of College Football game in August
4 Rugby players taking the opportunity to focus on the long game
5 Net-tricks: How John McEnroe became the inner voice of a 15-year-old girl
Real news has value SUBSCRIBE