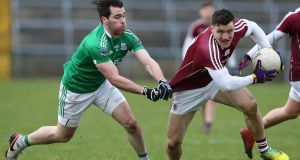 Galway’s Damien Comer tries to escape the clutches of Fermanagh’s Barry Mulrone at Brewster Park. Galway can seal promotion to Division One with victory over Kildare. Photograph: Andrew Paton/Presseye/Inpho

There is something about final-day league permutations that necessitates widespread mention of the abacus.

When trying to calculate how much injury-time a referee is about to add on, a television commentator would never say ‘he’ll have to consult his sun-dial to figure this out’, but a method of addition and subtraction first mentioned by Herodotus is still for some reason being propagated on days such as next Sunday by Marty Morrissey, that other great documentarian of human existence.

Whatever about abacuses, when sitting in a stand trying to keep abreast of scorelines coming in from elsewhere, it used to be the wild-looking man with the transistor radio pressed to a hairy ear that held the key.

The final league table tells a lot, but it doesn’t tell the exact manner of the last five minutes that decided promotion, survival or relegation

Now the burden of responsibility usually falls on the youngest person in the row checking and rechecking their phone for the latest news, although the pressure of an entire row of strangers depending on him or her can take it out of the youngsters these days.

In this situation it is usually best to defer to the man who bought the programme, and studiously scribbled his mathematical deductions on the side of the page beside where they printed the league table.

He’ll get his information from the stadium announcer, which may be less frequent but is widely considered to be gospel. He won’t be first with the news, but he’ll be right.

In fact this is the day your local stadium announcer has been waiting for. During the early rounds of the league, most people only listen in for gleefully-delivered news of local rivals’ demise at the final whistle, and studiously ignore all mention of parking violations, lost children and imprecations to support the county board lotto. But for one day only, to the still-voluminous hordes of people neither logging onto twitter every three minutes nor in possession of a radio, he’s the oracle.

Managers will of course be telling everyone that’ll listen that they will only be focused on their own game . . . which is absolutely true, until it looks like their team has temporarily forgotten how to play the game and are desperately hanging on, waiting for a favour for elsewhere. The final league table tells a lot, but it doesn’t tell the exact manner of the last five minutes that decided promotion, survival or relegation.

Having the option of a dig-out from elsewhere is nice to have, but there’s also something to be said for a straight shoot-out. Take Division Three for instance. Three of the four games in that division are refreshingly straightforward.

If there’s a winner between Armagh and Tipperary, in Armagh, then that team goes up (a draw will also do the home team). Offaly play Laois, and Antrim play Longford, with all four teams on four points. The winners stay in Division Three, the losers go to Division Four.

Galway have a golden chance to secure promotion, as they need only a draw against an already-promoted Kildare to join them in Division One next year. Even if they lose there’s a chance they go up, as long as Clare beat Meath. They will be hoping there’s no need for outside help.

Offaly and Galway will also have the benefit of bumper crowds at home for those games – or at least, they should do. Their footballers are the opening act on a double-bill that also features the county’s hurlers in national league quarter-final action.

I’d call it mid-table respectability, but there are many who would blanche at the description of this season as respectable for Cork so far

I met an Offaly footballer on the street this week, and we were able to tell each other that excitement was high in both of our respective counties at the prospect of being able to watch both county teams one after another in high-profile, high-stakes matches.

A third double-header is taking place in Cork, where their footballers are the opening act before the hurlers host Limerick. The footballers are the only team in Division Two who can’t either get promoted or relegated on the final day . . . I’d call it mid-table respectability, but there are many who would blanche at the description of this season as respectable for Cork so far.

And yet with all that, a win this Sunday would cover up a multitude. Whether you’re on the back of successive promotions, like Kildare or Louth, or successive relegations, as Down or Laois are staring down the barrel of, taking crumbs of comfort before the championship begins in six or seven weeks’ time is the task at hand.

For all the drama, defeats and delusion that Roscommon football has put itself through over the last couple of months, a win at home against Cavan on Sunday would give them something on which to hang their hat going into the summer. An abacus isn’t required for that, but championship seasons have turned on less.