Ciarán Murphy: It's not Pat Gilroy's fault I didn't become a superstar 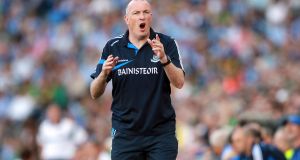 Pat Gilroy: it won’t surprise anyone to see the Dublin hurlers improve massively over the next three years. Photograph: Donall Farmer/Inpho

Pat Gilroy and I were once unlikely training partners. Back in a previous life, when I worked on Newstalk’s Off the Ball radio show, I joined St Vincent’s for a year – thinking that working until 10pm every night precluded any chance of playing football for my club at home in Galway.

In the end, working until 10pm pretty much precluded any chance of playing for Vincent’s either, but I had great fun along the way regardless. With Mickey Whelan in charge, and my non-appearance at training becoming an issue, I was paired up with the only other man who worked ‘irregular’ hours . . . the only slight difference being that man – Dublin’s new senior hurling manager – started work at 9am or before, and worked every moment God sent, and I strolled into work at 2pm.

So it came to pass that on a handful of occasions, a man three years away from taking the Dublin football job, and Whelan, the coaching nonpareil who Gilroy would take with him into the inter-county set-up, and me, trained away ourselves. He’d even pick me up outside my house, with three hours’ work probably done already, while I rubbed the sleep from my eyes.

This is the kind of personalised training regime, under two of the brightest minds in the GAA that should’ve propelled me to superstardom . . . that it didn’t is not what I would term a major blot on either of their copybooks.

Whether it’s joining a new GAA club, or starting a new job, or moving to a new neighbourhood, it takes time for you to become attuned to the balance of power and influence in any new environment. And Gilroy certainly didn’t give off the impression immediately that he was a hugely successful person in business or a natural leader of men.

But as the summer progressed and I got to know more of the club, it became clear that he was a hugely impressive individual. His company were the team sponsors. My team-mates all told me, almost without fail, of the summer jobs they had working with that organisation as college students. He was the sort of guy you’d be proud to have as your clubmate, and they were.

It didn’t surprise me, nor did it surprise anyone who has ever spent any time with Gilroy, that he made such an impact when he took on the Dublin senior football team, and similarly it won’t surprise anyone to see their hurlers improve massively too over the next three years.

It is in some ways a landmark appointment in the GAA. We’ve all known for the last few years that being an inter-county manager now is less about picking the team and pinpointing tactical wrinkles, than it is about being an effective chief executive, an orchestrator rather than a details man. This is just the most obvious example of it.

Hurling people are not usually shy of telling football people what they do and (more to the point) do not know about the beautiful game. Can you imagine if the Cork hurlers had turned to Conor Counihan as their new team manager in the period immediately after he became an All-Ireland winner in 2010? Something tells me there would have been war.

Dublin is different – football is where the institutional power lies. And to have been involved with this generation of Dublin footballers and, more to the point, have been the creator of the high-performance environment in which they now operate, is to insulate yourself entirely from that criticism at home.

But it would be premature to suggest that would shield him from criticism from outside the county. Something tells me those under-15 and under-16 county championships he won with Vincent’s under Lar Foley would do little to persuade the doubters.

He will surround himself with well-credentialed hurling men, no doubt. That other great coaching ecumenist Anthony Cunningham is already being hotly tipped to be on the ticket with him.

And the key battleground for the Dublin hurlers, the battleground decisively lost by Ger Cunningham in the last three years, is where Gilroy will have to do most of his work – making hurling for Dublin seem not just worth people’s while, but a team that you should be scrambling to be a part of.

There’s no doubt that Gilroy is as well positioned as anyone to win that war. None of his prospective players will have to be convinced of his ability to create a culture and an environment of relentless self-improvement.

In the midst of all the to-ing and fro-ing in recent weeks about the numbers game being skewed in Dublin’s favour, their fortunes ultimately still lie in the hands of just two men with rare ambition and ability leading their county teams . . . and that might be all they need.