Ciarán Murphy: Galway should be plotting to face Dublin - not Monaghan 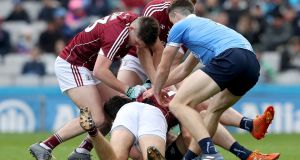 Galway and Dublin in action during the league final at Croke Park. The teams could meet again in the All-Ireland – whether at the semi-final or final stage. Photograph: Bryan Keane/Inpho

It has been quite a summer for picking and choosing your way through the easier half of a draw.

Not four weeks since England and Belgium played out the phoniest of wars in their World Cup group game, when it appeared as if neither of them could decide whether they wanted to win the game or not, the Galway footballers are now faced with a similarly vexing issue.

It’s beyond doubt that a route incorporating a win or a draw against Monaghan in the last round of fixtures in Group One of the All-Ireland quarter-final group stages, thereby avoiding Dublin, makes it easier for them to qualify for a first All-Ireland final since 2001. That this is disrespectful towards either Tyrone or Donegal, the eventual runners-up in Group Two, is also probably beyond doubt.

Dublin are going for four All-Ireland titles in a row. That vast difference in big-match experience between Dublin and Galway (if Galway make a point of trying to avoid them in a semi-final, and then actually beat Donegal or Tyrone, we must reiterate) must be a major plus point for the reigning champions.

In the way that we hold only the obviously great to ridiculously unfair standards, we can say that this Dublin team has yet to give us a defining All-Ireland final performance. They ground out a win in a classic match last year, but have they cut a team apart on the biggest day in the sporting calendar? No. Not yet, at any rate.

So quite apart from the idea, widely held but disputed in this parish, that even a losing All-Ireland final appearance is hugely beneficial to a team on an upward curve like Galway, it appears as if Dublin are an even more intimidating opponent in the semi-final than they are in the showpiece.

The matter is complicated massively by the tightness of the championship schedule this year. Win, draw or lose their last group game against Monaghan, Galway play an All-Ireland semi-final the following weekend.

Whatever about wanting to manipulate the draw to their advantage, Galway have a massive headache in relation to the players they just can’t do without – including but not limited to Seán Andy Ó Ceallaigh, Tom Flynn in particular since Paul Conroy’s horrific injury against Kerry and Ciarán Duggan’s continued absence, Damien Comer, Shane Walsh and Ian Burke.

Could Galway live with themselves if they lost one of those five players through injury in a game they didn’t need to win? A game that might not be a dead rubber, but is at least a zombie rubber as far as Galway are concerned?

Galway’s improvement over the last eight months has been startling – to the point that they and their fans have thoughts only for winning the All-Ireland, not getting to an All-Ireland final and losing creditably. The choice of losing to Dublin in a semi-final, or in a final, doesn’t matter a damn now. They’re in it to win the whole thing.

From today, they have two-and-a-half weeks at the earliest before they have to face a semi-final. That time would be best spent plotting for Dublin, not Monaghan. Name a team made up of half of their regular starters, and half of their overperforming bench who will no doubt be eager to make an impression, and let the result take care of itself.

Win, and all that preparation time will stand to them if they win their semi-final and have to face Dublin in September. Lose, and it’s a week. They can bust a gut to avoid Dublin, go and win their own semi-final, and hope that Kerry or Monaghan take them out on their behalf . . . but this is not an option I’d be spending too much time thinking about.

We could have been spared much of the tiresome England/Belgium build-up if Gareth Southgate had just come out and said that, in the context of a month-long tournament, taking the opportunity for rest and avoiding injury for his best players were the only reasons he was leaving them out. If they landed on the easy side of the draw, or the harder side of the draw, it would only be a offshoot of that.

From the moment teams qualified for the Super 8s, this was always going to boil down to a six-week run to the finish line in the first weekend of September. That run will surely involve beating Dublin at some point. You might as well be in the best shape possible for that challenge when it comes.