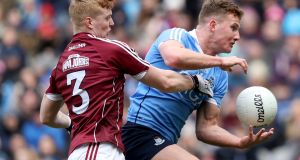 Many Galway fans in their heart of hearts would have taken a four-point defeat to Dublin in the Allianz Football League final if it had been offered to them on Sunday morning. In reality, there were three scenarios at play before throw-in.

There was a big chance that Dublin would win convincingly, crushingly (as we have seen many times before in league finals, particularly against teams who have bloodied their noses in the regulation league game, as Galway did two weeks ago). There was a less likely scenario that Galway would perform creditably and lose by five or under, and then, as harsh as it may sound, a 10 per cent chance that Galway win that game.

With that in mind, a four-point loss franks the form-book of the last nine weeks, and in many ways allows people to reflect on results such as beating Kerry in Tralee, or Mayo for a third time in a row, and say, “Yeah, we were right to get excited about that”. It would have been harder to do that if Sunday had gone differently.

So what the hell has happened to the Galway footballers? The easy answer is to say that Paddy Tally has riden down from the north and gotten a bunch of footballing dilettantes to finally start taking defending seriously . . . but it’s more nuanced than that.

The inconvenient truth for everyone talking up Tally’s influence is that when Galway drew 1-10 to 0-13 with Roscommon in that terrible 2016 Connacht final, they played pretty much exactly the same formation they’ve been playing this year.

Galway are not setting up more defensively, but if Tally’s influence is anywhere it’s in the bite and the hurt they’re putting into tackling when in defensive positions. They’re meaner now, more cynical, if you like . . . but they’re not any more defensive structurally.

Of greater significance to Galway’s renaissance this year has been the addition of Seán Andy Ó Ceallaigh and Peter Cooke in vital areas of the field. Cooke is a prototype modern-day midfielder or middle-third player; big as a house, with tons of energy, and while his distribution can be iffy at times, it would be a pity to tell him to stop taking risks with the ball either. He’s had a great spring.

Ó Ceallaigh was exceptional even in defeat on Con O’Callaghan in the 2017 All-Ireland under-21 final, and his speedy graduation to Galway’s elite is no surprise. But the confidence that he shows on the ball or in the air has spread throughout the team.

Like it or not, Galway had a major problem last summer preparing for Kerry. The pre-match build-up focused to an almost absurd degree on whether they could stop Kieran Donaghy. In the end, Galway had no answer. They started a young player with little or no championship experience on him, and he was bullied.

It’s like a high handicap golfer who can’t hit his driver off the tee. Even in the best case scenario, he can hit three good seven irons, and hole a putt for a par . . . but he knows he’s not really playing golf.

Players such as Eoghan Kerin, Johnny Heaney, and Eamon Brannigan in particular have thrived at the highest level, but there are still outstanding issues.

Shane Walsh has mixed the sublime with the substandard this year, and the suspicion remains that he might suffer under this system. To be frank, that problem goes well beyond Galway’s set-up and strikes to the heart of how the game is now played. If the game has out-grown players like Shane Walsh or James O’Donoghue in Kerry, it’s a pretty damning indictment.

It might seem like another damning indictment of where the sport is at to say that there may not be even one of Corofin’s All-Ireland winners on the starting XV against Mayo in Castlebar on May 13th. But with Liam Silke going to the US for the summer, apart from Ian Burke there are no other real nailed-on contenders.

The success of the last 10 weeks means that Kevin Walsh’s selection policy brooks no argument, even in Corofin. He could certainly have run the bench earlier on Sunday, with Galway’s first substitution only coming around the 60th minute, and taking off game-winners like Walsh, Heaney and Paul Conroy raised eyebrows, but all criticism is rendered moot for now.

For the first time in almost 15 years, Galway enter the championship as live contenders.