Ciarán Murphy: Galway happy to come in under the radar 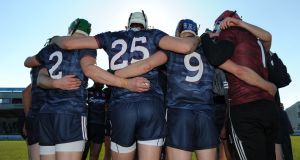 Galway in a huddle before the encounter with Dublin. Some of the team’s greenhorns could do with more testing games than Division 1B can provide. Photograph: Tommy Grealy/Inpho

This time last year, the hurling world was aflame with discussion about Tipperary’s remorseless charge for two-in-a-row. They had just played out a spring classic with Kilkenny in round four of the National League, which ended in a draw, they had won the three games before that, and they looked a pretty good bet at that stage to go back-to-back.

Every selection was pored over, every young player introduced to the starting line-up was a sign of their growing strength in depth, and each week brought fresh heroics from John O’Dwyer or John McGrath. It seemed like there was a lot of pressure around their camp, but it also seemed inevitable.

This was just how it had to be – if you’ve won an All-Ireland, you have to go out the following year and defend it as best you can. You can’t do that without stepping into the spotlight. It wasn’t something that Michael Ryan, or Brian Cody before him, or Davy Fitzgerald before that, could do anything about.

But this spring Galway have been putting the lie to all that. This must have been the most low-key start to an All-Ireland defence this century. There hasn’t been a word said about them. They began their year with a guard of honour from Antrim in Pearse Stadium in January, only barely squeaking over the line in the game that followed the formalities.

Subsequently they’ve beaten Offaly and Laois without breaking too much sweat. Last weekend they beat Dublin, who have only beaten Antrim this year, and finally this weekend – weather permitting – they face Limerick, with the TV cameras in town, and with a sense of anticipation finally stirring again in the home of the All-Ireland champions.

The argument might very well be made that this is the way of the future, that Galway would be better off staying in Division 1B where they are. Who needs to beat Limerick next weekend, when they can get at least one and possibly three games against top-class opposition in the knockout stages of the league, and still be fresh coming into the championship?

Galway seem almost uniquely well-placed to take advantage of a spell in the lower division. They have a battle-hardened first XV, with no one area that needed urgent surgery. They have forwards who either started the All-Ireland final, or finished it in a blaze of glory, with a rejuvenated Davy Glennon also now pushing for inclusion as well as a couple of very highly thought of young players.

They have Paul Killeen to come back later in the year to a very settled backs division, which might need one or perhaps two more championship-ready deputies. Shane Cooney from the St Thomas’s production line could be one of those, and Seán Loftus looks ready to be another option at midfield or wing-back.

The two totemic figures in this team, David Burke and Joe Canning haven’t been seen in action so far this year. There has been no clamour to reintegrate them, and no worries about their ability to be at battle-pitch when required later in the year. It was interesting to see how seriously Canning took his ‘maor uisce’ role in Parnell Park on Sunday – he looked more like a member of the management team than an injured player helping out with a few bottles of water.

Problems have a habit of revealing themselves to champions not by degrees but in a blur. And that lack of defensive cover on the bench last year could be tested early on

Right now, given the experience floating around that panel, 1B appears to suit Galway down to the ground. But problems have a habit of revealing themselves to champions not by degrees but in a blur. And that lack of defensive cover on the bench last year could be tested early on. With four games in five weeks, injuries are inevitable.

Are the auditions of the last month enough to go on? If Micheál Donoghue is the worrying type, then he might look at the crash course in inter-county hurling the likes of Richie Leahy and Martin Keoghan are getting for Kilkenny at the moment, for better or worse, and hope the latter stages of the league give some of his greenhorns a similar test.

There are other, perhaps more prosaic reasons for getting the hell out of Division 1B. The Galway county board’s balance sheet could always do with two or three home games every spring that would attract big crowds, but it’s not just a financial matter.

There is also the more intangible factor of building on the adulation of last year. County Galway is not Kilkenny, and Galway city is not Thurles. Both city and county were utterly in thrall to its hurlers last September, but they haven’t had a chance to build on that All-Ireland winners’ momentum.

Right now, Galway seem to have it solved. The word of warning for them is that we said exactly the same thing about Tipperary, in very different circumstances last year.