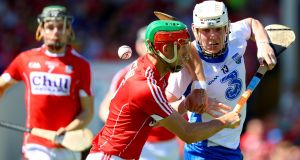 The moment relegation was avoided in the league, Waterford’s preparations for the Munster semi-final on June 18th began. Photograph: Inpho

It’s been a natural part of every sporting career in the world, but in the GAA the idea of bouncing back straight after a defeat is a relatively new concept. There was a time when one defeat was enough for a full summer of recriminations, a winter of discontent, and a New Year when the players told themselves the same lies they told themselves 12 months before – that this year, everything would be different. Defeats were parked, or buried entirely without an autopsy, and the thrill of the new season would take over.

But recovering from a crushing championship loss has to be almost instantaneous now, and this in an environment where many counties still fetishise the date of their first championship game from the previous autumn.

Anthony Daly, writing in the Irish Examiner last week, said that in 2012 when he was in charge of the Dubs, they were focused so completely on their upcoming meeting with Kilkenny on June 23rd of that year, that many of the players had their pin numbers or house alarms changed to 2-3-0-6 from much earlier on in the spring (I presume Conal Keaney and the lads have since changed them, or they may not have appreciated the public airing of that particular tale).

Waterford, it appeared, had done something similar this year. The moment relegation was avoided in the league, the preparations for June 18th began. And nothing was going to interrupt them, not even a league semi-final or final – hence the curious decision to field an extremely weakened team for that league quarter-final against Galway in Pearse Stadium in April.

It’s not exactly revolutionary to suggest that being right for the championship was more important to Derek McGrath than winning a game against Division 1B opposition in the league. But it was all predicated on a performance to match, on the day that really mattered.

Maybe it’s just linguistics, but if you listen to inter-county manager interviews as the leagues wind down, the date of their first championship game will always get a mention. The focus is not on delivering your best over the course of the summer – it’s about getting over the first hurdle and worrying about the rest afterwards.

Kieran Kingston’s Cork team are an excellent example of what happens when the first day goes better than you could ever have hoped. Within a couple of weeks, they’ve gone from Tipperary cannon-fodder to genuine contenders, and have built up the sort of momentum that might even carry them all the way. All on the back of delivering on the “21st of May”, as they no doubt had been characterising the start of their championship season since Christmas.

It’s a pretty narrow focus for a group of men to carry around, and that can certainly help . . . but only if you go and win the game. Lose, and you’re very quickly scrambling around for alternative messaging.

In reality the next game for last weekend’s biggest losers, Waterford and Donegal, are the really big games. Both of those teams would consider themselves All-Ireland contenders, and both of them are still in the hunt. But they have no further room for error.

And how do managers go about shifting focus away from the only game they’ve been talking about for six months within 48 hours of that game going horribly pear-shaped, as happened at the weekend?

Planting the seed beforehand, that losing is a distinct possibility and isn’t necessarily fatal, runs the risk of taking the maniacal edge off your team’s performance. It’s a kind of double-speak that players are happy to accommodate – the twin truths that losing this game is non-negotiable, and that there’s another way into the All-Ireland series if and when the defeat comes, is a circle that GAA players don’t seem to have too much difficulty in squaring.

For Waterford and Donegal, and Meath too, the disappointment of losing at a stage where they would have aimed to push on is exacerbated by the anger of under-performance. Turning that anger into positive energy is the big challenge now for managers.

And after six months of laser-focus on one team and one date, they may only now have two weeks to acclimatise to new opponents and new challenges in the qualifiers (or five days, in the case of the Waterford hurlers, who will find out on Monday morning who their opponents on Saturday week will be).

Getting the disappointment of a provincial championship loss out of their system might not seem all that easy, but since 1998 in hurling, and 2001 in football, making sure that cognitive dissonance, of recovering quickly from a loss that they were told not to countenance, kicks in is a key part of a championship summer for pretty much everyone now.