Ciarán Murphy: GAA needs to strike while the iron is hot

Second Opinion: The time is right to reform hurling league and football championship 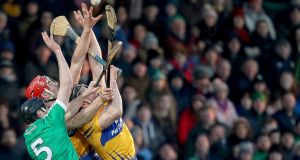 Limerick rode the wave of their league success all the way to an All-Ireland title. Photograph: Oisin Keniry/Inpho

The All-Ireland hurling championship of 2018 continues to wield its influence, four weeks after it finished. The latest developments on foot of the brilliance of the fare served up this summer were highlighted by GAA president John Horan, who was speaking at the launch of the ESRI report on the impact of an inter-county career on our best footballers and hurlers yesterday.

In short - the hurling league as we’ve come to know it in the last five years or so is a little too competitive for our liking, and the football championship has a chance to ride a wave of public opinion to lasting reform.

The idea that the league should be reformed because it’s too competitive might strike some as a little counterintuitive, but it’s an inevitable result of this summer. You can’t preface two highly competitive leagues which lead to an All-Ireland championship, with an earlier, slightly-less competitive league.

The problem as Horan sees it is two-pronged - teams have taken staying in the top flight a little too seriously, but those who have stayed in Division 1B have ended up winning the last two All-Irelands. Try and make sense of that.

He’s right, of course. Taking the pressure off by dividing the two teams into two equal groups of six should allow the big teams to experiment with the championship in mind, would presumably negate the need for quarter-finals, and in turn put an end to the rather bizarre spectacle of the team finishing fourth in Division 1B progressing to the quarter-finals, while the team who finished five places above them in the league pyramid does not.

Limerick looked at promotion from Division 1B as a major aim for 2018, and they rode the wave of that success all the way to an All-Ireland title. They had time to bed in for the spring, rotate their squad where required and get a few wins under their belt.

The teams in Division 1A never like the idea of relegation, and as a result are thrown into a heavy rotation of extremely competitive league games. These leave little room to experiment and are almost as exhausting as the provincial championships turned out to be this summer.

There are pros and cons to life in both divisions, so there’s a chance to raise the quality of the teams ranked 9-12, which is something we can all get on board with. Instead of them playing each other, they’ll get to play teams across the spectrum of the top eight. If games against the elite are the way to progress, they should get them.

As I’ve said in these pages before, the quality of the structure of the hurling championship, or any sporting competition, is beholden to the quality of the teams competing in it. But if the current equality of standards across the top six, seven or eight teams is the Trojan horse through which we achieve a lasting and more equitable summer of activity for all our inter-county footballers, well then we should probably bite our tongues and say nothing.

Certainly, whatever about the long-term chances of hurling maintaining the current absurdly-high and absurdly-even level of competition in both provinces, there is no doubt that there will always be a vast chasm between the best four teams and the worst four teams in the All-Ireland football championship. Giving all eight of those teams, and the 24 in between, a more competitive summer is now moving closer to a reality.

The players don’t seem convinced, and reading one of the more compelling player interviews I’ve ever read, with Niall Ewing of Sligo in the Irish Examiner from earlier this summer, a number of factors become clear. Players still want to feel like they can win their provincial championships, and should be given a chance to do that.

Divisions 1 and 2, and Divisions 3 and 4, in football could be split in a similar fashion to how the top of the hurling league will hopefully be reformed, ensuring the big teams don’t keep playing each other and increasing the gap between them and the rest. But a second-tier championship is inevitable.

Whatever about being the curtain-raiser on All-Ireland final day, which is perhaps not as appetising a prospect as Horan envisages, TV coverage - over and above the 45 games RTE and Sky are currently contracted to show, and possibly incorporating new deals with one or all of Virgin Media, Eir sport and TG4 - is the carrot that will drive this through. The time is now.

In his comments this week, Horan referenced the appetite for change that is in the association now, an appetite previously marked entirely absent. You can spend your entire life being risk-averse, but when you do eventually decide to take a risk, and it pays off handsomely, then you can very quickly change the habits of a lifetime. One hopes this is what happens in the GAA.