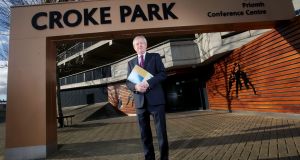 The release of the annual report of the director general of the GAA has become a bit of an event every year.

It has now effectively become a state of the nation address, and it was interesting to hear Páraic Duffy refer to it as pretty much that earlier in the week – “a historic record that in years to come, people will look back on 2016 and see what were the issues that the GAA were concerned about”.

Whatever about the level of interest people will have in reading it in 20 years’ time, it’s usually worth a read on the day of its publication. His predecessor Liam Mulvihill often used it to launch a Hawarden Kite or two, a chance to air ideas before they had been fully formed in the public consciousness, and Duffy has continued in this vein.

The main headlines coming out of this year’s iteration, ahead of motions to congress next month, centre on moving the dates of the All-Ireland finals forward into August, limiting the number of replays, and the introduction of a round-robin system for the last eight in the football championship.

There was also mention of the impact of rural decline, sanctions for playing in America in the summer-time, IT developments in Croke Park and in other grounds around the country, TMOs and concussion. But one constituency is not best pleased.

There will be 15 games left in the football championship once the provincial and qualifier series are finished, if the round-robin system replaces the quarter-finals as proposed. There will be just five in hurling. That seems pretty lopsided, and it is.

After 2007, the GAA decided to remove two of the four hurling quarter-finals, as they felt that the Munster and Leinster title winners should proceed directly to the All-Ireland semi-finals. This didn’t make any sense then, and it certainly doesn’t make any sense now.

There are eight or nine teams who are of a broadly similar standard, as has been evidenced by who has been promoted and who has been relegated from division one of the league in recent years.

That decision in 2007 robbed us of two games between those teams for no reason. You may argue that the provincial champions deserve to be rewarded but if, as we are always told whenever a fairer open-draw championship system is proposed, the Munster championship is so sacrosanct, surely the winning of it is reward enough?

The GAA have seen that the top teams in football don’t play each other enough at the business end of the championship. The system that goes before congress next month seeks to redress that balance.

In 2007, the hurling development committee lobbied for a proposal at congress that effectively meant teams often only need to win just four games to win the hurling All-Ireland, as has happened in four of the nine championships since.

The decision to reduce by half the number of quarter-finals was not one foisted on hurling people by a football-centric Croke Park. It was recommended by a committee made up of hurling men of unimpeachable standard, and chaired by Ned Quinn, the godfather of Kilkenny hurling. That decision was made in good faith, but it was the wrong decision.

Players want to play more games. The summer is certainly long enough to accommodate more games. The ultimate aim of any championship structure is to produce a worthy winner. If hurling people agree with all three of those points, then they should be paying very close attention to what happens at congress next month.

If they see that two groups of four is good enough for football, then maybe they might just think that a change of approach could work for their own game. Unfortunately, taking their lead from football is not something hurling folk are in the habit of doing.