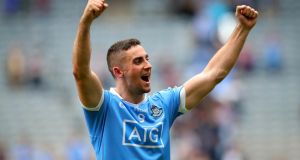 This Dublin team contains some great players, including James McCarthy (above right) McCaffrey, Fenton and Cluxton – the greatest goalkeeper we have seen. Photograph: Morgan Treacy/Inpho cy

So where’s the problem with Gaelic football, as you see it?

Was it on view last Sunday, when Dublin won their fourth All-Ireland title in a row, or was it on view in that grueller in Castlebar between Galway and Mayo, or in Páirc Uí Chaoimh when Kerry humiliated Cork in their own back yard?

Or was it in Omagh when Fermanagh scored 1-8 and found that was enough to beat Monaghan? What’s grinding your gears from all that?

The laundry list is extensive, and there’s no point in saying otherwise. But to say Dublin is the biggest problem facing the game is wilfully ignorant. The game is in too much trouble to say that one ultra-dominant team, playing at times breathtaking football, with some of the best players of all time in their number, is the real problem. If the entertainment outside of the games featuring Dublin was scintillating, that would be one thing. But we all know different.

The first problem is structural. The championship as it is currently constituted sees all the attention go to a strand of the competition that isn’t do-or-die (the provincial championships), while we ignore the real knock-out stuff in the qualifiers. Then we wait for the Super 8s to start up, which again isn’t do-or-die, at least not until Round 2.

We perhaps should have known that the only round of the quarter-final group stages where every team knew what was at stake, and knew they couldn’t afford to lose, was the best weekend of the whole thing.

Dublin-Tyrone in Omagh on a Saturday night, followed by Galway-Kildare and Kerry-Monaghan on the Sunday, was the best 24 hours of the summer.

By Round Three we went back to a situation where only one of the four games was truly make-or-break for both teams, and it again seemed a bit of a damp squib. That second weekend should give us some cautious cause for optimism, but it was the first time all summer Kerry and Donegal were playing games they just couldn’t afford to lose.

I have been a fan of the Super 8s since the change was first mooted, but that’s a problem, particularly when teams aren’t being troubled in their provinces.

As I suggested last week, changing rules to stop Dublin might seem like the right thing to do, but we need to change the rules to ensure Monaghan-Fermanagh doesn’t happen again, not Dublin-Roscommon, for all its faults.

The third problem is the lack of competitiveness. There have always been great teams. Dublin have been the beneficiaries of financial doping in recent years, and if, as seems to be the case even in the capital, everyone now agrees that can’t continue, their other major advantage reverts to the same advantage they’ve had since the start of the association – population. And that has proven not to be quite the guarantee of success in the past that you’d have thought.

We might have to live with another few years of this, but there’s reason to believe it’s cyclical. What ended Kilkenny’s drive for five in 2010 was an exceptional Tipperary team, or at least a Tipperary team that played exceptionally for a summer. Kilkenny’s standards didn’t drop. They came back and won the next two, remember.

Someone else found a way to win, but don’t wait for the Dubs to come back to the pack. This might feel unprecedented, but Kilkenny won six All-Irelands in seven years between 2006 and 2012. Even Dublin haven’t done that . . . yet. And remember Kilkenny took a year off in 2013, and came back and won the next two after that too.

We said all along that Cody’s genius lay in being able to regenerate his team even as they were winning. Jim Gavin’s genius is something similar, perhaps on an even more impressive scale. But there were some players Cody couldn’t replace.

Jack McCaffrey and James McCarthy are better players, in my opinion, than Tomás Ó Sé. Brian Fenton is the best midfielder without a column in this newspaper of the last 30 years. And Stephen Cluxton is the greatest goalkeeper of all time . . . who turns 37 this month.

People all around the country know exactly how deflating it is to compete against what often seem like impossible odds. Clubs in Galway are playing in a championship with five-in-a-row champions who also happen to be the reigning All-Ireland club champions, and even All-Ireland Sevens champions as of last weekend.

Football in Armagh didn’t die just because Crossmaglen won 19 county titles in 20 years – the county claimed the only All-Ireland they’ve ever won in that time. The challenges facing counties at the moment are challenges a lot of the players in those teams are probably already familiar with at club level. Football is in some trouble alright – just don’t blame the Dubs for it.