Ciarán Murphy: Everyone needs a bit of Roscommon in their lives

They lived championship history against Galway while Waterford overcame theirs 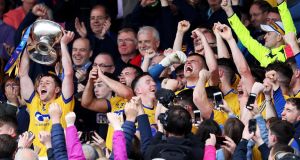 Ah, that’s Roscommon for you. Or Waterford – how Waterford was that on Saturday night. And this weekend, are we going to see Down do something that could only be described as deeply . . . Down-like?

Counties have a funny habit of getting up close and personal with their own championship history, whether that’s by living up to it, or explicitly fighting it. In many ways, it’s utterly daft to suggest that 58 years of losing history against Kilkenny could weigh so heavily on the Waterford hurlers, but we might also struggle to come up with any better ideas to explain what happened in the last eight minutes of ordinary time in Thurles on Saturday evening.

At the moment when TJ Reid pounced on that sliotar, like a number 8 at the back of a dominant scrum marching over the try-line to score Kilkenny’s second goal, there wasn’t a Waterford supporter on the planet that wasn’t thinking, “oh no, not again”.

It’s only human nature, and it’s also only human nature for that doubt to transmit itself to the players on the field. That collapse, and the subsequent recovery in extra-time, represented a pretty extraordinary mental journey for the Waterford hurling team.

They came face-to-face with the worst scenario possible, their Room 101, and managed to dig themselves out. They were given the choice of being same old Waterford, or being something more, and they made the leap.

History was their enemy, every bit as much as Richie Leahy and TJ Reid were, and yet they managed to shake it off. Beating this particular iteration of Kilkenny does not immediately confer upon you the title of All-Ireland favourites, but Waterford needed to beat them. However they did it, they needed to beat them. And they did.

In the same way that history can be your enemy, it can also be your friend. In amongst the astute planning and tactical nous of Kevin McStay and Liam MacHale last Sunday, was the realisation that they didn’t need to explain to their team, young and inexperienced as they are, what being from Roscommon is all about.

You know when you read interviews with millionaire footballers, and they’re asked how they keep themselves grounded? “Well, my old friends from home wouldn’t be long cutting me back down to size if they thought I was getting too big for my boots.”

Roscommon – never happier than when written off. Roscommon – who never knowingly respected another team in their lives.

That is the vital function which Roscommon provide in the Connacht championship, have done so for years, and did so to such devastating effect on Sunday.

At the exact moment that Galway football fans began to believe that they had a team travelling in the right direction, Roscommon appeared on the horizon. Roscommon – never happier than when written off. Roscommon – who never knowingly respected another team in their lives.

The sheer . . . Roscommon-ness of last Sunday is hard to overstate. It had all the key elements of the archetypal Roscommon performance. The key ingredient of course is an opposition not paying them due respect. Once that’s there, they’re usually in business.

And if they delight in taking down more vaunted opponents, Down only need the slightest whiff of success to get their swagger back. Down can’t escape their history, even if they wanted to.

Their win over Monaghan was described everywhere as pure Down. What that meant exactly is unclear, other than to say that Down football is about winning, it’s about hardness, arrogance, and it’s about fellas like Connaire Harrison, who appeared in that Monaghan game to be a personification of all those attributes.

In the same way that history was a weight across Waterford’s shoulders at times on Saturday evening, history can be a crutch for Down this Sunday. No one expects them to be over-awed by being back in an Ulster final, even if it’s only their second this century. Whether this group of players have earned it themselves or not, they are respected, purely by virtue of the jersey they wear.

A history of success might be a lot to live up to, but it is also a standard that is demanded. It’s easy to say that Kerry and Kilkenny have tradition – of course they do. Smaller counties, like Waterford, Roscommon and even four-time All-Ireland winners Down, cultivate rather different histories. All three of them have chances in the coming weeks to write some more of their own.