Division One finalists in 2014, the Oak Leaf men could soon be bound for Division Four 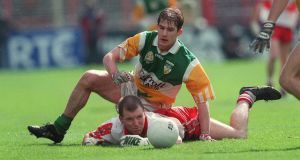 Twenty years in sport doesn’t really seem like that vast an expanse of time – wrapping your head around a list of the best players or best teams of the last two decades would quickly lead to the conclusion that, at the very least, you’re not comparing apples and oranges.

For better or worse, the game hasn’t changed so fundamentally that Jarlath Fallon or Glen Ryan or John McDermott would not still be very much at home at the top level in today’s Gaelic football.

And yet, over 22,000 people came to Croke Park to watch Derry and Offaly play in the 1998 League final, and this weekend those two teams play (in a game originally fixed for last weekend but postponed due to the bad weather) in a relegation four-pointer in Division Three, with the Division Four trapdoor yawning.

The teams are rooted to the bottom of their division with no wins so far this spring, and even their respective points difference tells a tale – Offaly’s is minus 19, and Derry’s is minus 10, after just two games. They are genuinely struggling badly with the challenges of playing in Division Three. Only Wexford’s poor form gives either of them a chance of staying up, possibly at the expense of the other.

Derry have the Slaughtneil players to come back into the fold once their club exploits are completed, perhaps after this weekend. But it’s a precipitous decline for a county that has convinced itself over the years that they are capable of taking out anyone ‘on their day’. Unfortunately, they have also proved time and time again that they are capable of losing to anyone ‘on their day’ too.

Division Three of the league is not somewhere you want to spend too much time. As Armagh have discovered in recent years, the quality of team is just good enough for you to very easily get caught if even a hint of complacency sets in. Promotion, even for a team like Armagh with a decent age profile, a committed panel, and a coach with pedigree, is far from guaranteed.

This year it looks like they should finally be able to get out of there, but even last weekend they were four points down at home to Longford with a couple of minutes to go, before they pulled a win out of the bag.

Longford barely escaped relegation to Division 4 last year on points difference, but look well capable of promotion now if their two thumping wins on the first two weekends, and subsequent one-point loss to Armagh is anything to go by.

Carlow manager Turlough O’Brien was speaking to Colm Parkinson on the GAA Hour podcast on Monday, and he made the point that he reckons Carlow are well capable of competing in any of Divisions Two, Three or Four, once they finally manage to get out of the bottom tier. And that would appear to be borne out by recent results in the league.

Louth finished second in Division Four in 2016, and then did the same in Division Three in 2017. They might be struggling slightly in Division Two this year but perhaps that has more to do with losing their manager than a huge increase in the quality of team they’re playing?

Leaving aside Waterford, Wicklow, Leitrim and London, who have more often than not made up the bottom four in Division Four in recent times, every team from there to the top of Division Two has reason to both aim for promotion and fear relegation.

Since the league was reshuffled at the end of 2007, Westmeath have been promoted four times, and relegated five times. Only once in those ten years have they stayed in the same division!

What would Carlow have to fear in Division Three in 2019 if they do get promoted next month? And if Carlow can prove that upward mobility is possible, all the way to within touching distance of Division One as Clare have shown, then who can truly say their cause is hopeless?

That’s the upside, and Offaly have been long enough in Divisions Three and Four to cling onto that as their hope. For Derry this Sunday, all they can see is the downside. A slide once started can be hard to stop. They played in the Division One league final in 2014, but they know they’re in the scrap of their lives now.