Ciarán Murphy: Cork’s defeat of Tipperary alters all the permutations 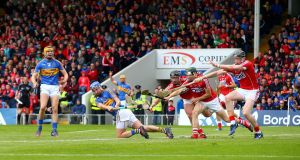 We’re all guilty of it at this time of year. It’s only natural to take a look at the GAA championship fixture list, and extrapolate from expected results possible calendar clashes – communions and christenings, bar mitzvahs and barbeques . . . the best laid plans of an Irish summer at the behest of a team of amateurs, scandalously unaware of how a very bad (or even an unexpectedly good) day at the office for them could impact on your social diary.

I remember walking out of MacHale Park in Castlebar last year in a daze amidst the new, entirely unheralded prospect of a summer march through the front door for the Galway footballers. None of us even knew what date the Connacht final was on . . . but the Mayo fans walking out alongside us knew exactly when it was set for.

They had carefully plotted a course through the summer – family holidays the day after the Connacht final, hotels booked in Dublin for the quarter-finals, not offering up any hostages to fortune but likewise refusing all dinner party invites in Bohola for the third weekend in September. All blown apart by one Tom Flynn goal and one lacklustre home team performance.

The hurling world in general has been salivating at the prospect of Wexford against Kilkenny on a summer’s evening in Wexford Park since the draw was made, and it became clear that Davy Fitzgerald was stirring something in the south-east.

But the uncomfortable truth is that Wexford aren’t there yet. They have to go to Portlaoise this Sunday and beat the home team to make that rather tantalising possibility come to pass. Laois people are getting pretty annoyed at people taking the Wexford win for granted . . . I know, because I did it myself on RTE Radio 1 this week, and was duly reminded in short order.

Wexford only beat Laois by 4 points when they played in Wexford in the league 2 months ago, so maybe we shouldn’t be quite so quick to chalk this down as a racing certainty. But the people want the theatre of a diminished Kilkenny going up against their old neighbours with Davy Fitz sitting up in the stand, banned but nevertheless still certainly the centre of attention.

And Wexford still have to deal with the nagging suspicion that it would be typical of Wexford in this century to lose this game in three days time. That can be a powerful mindset to try and overcome.

But the point I was trying to make – before I took a blowtorch to Laois’ chances – was that Cork’s win over Tipperary, and the manner of that performance, has blown the championship wide open in a way that was just impossible to foresee when you sat down to plot a route to the All-Ireland for any of the top seven or eight teams.

If you asked anyone there last week how they saw Wexford’s year going, it might well have been a win over Laois, a narrow, creditable defeat to Kilkenny at home, and then a journey through the qualifiers that might lead through Limerick or Cork to a win over Clare or Galway in an All-Ireland quarter-final. And once in an All-Ireland semi-final, who knows what might happen?

The qualifiers are not the place you want to be now, not with Tipperary lurking. The need for Wexford to beat Kilkenny (and Laois too, of course!) just became all the more pressing.

Galway were targeting a Leinster final win over Kilkenny, both to keep up the momentum gained throughout the league to supplant Kilkenny as a top two team, but also to keep Tipperary on the other side of the draw from them. Now with Tipperary coming through the qualifiers, they might have to beat Kilkenny in a Leinster final, and then – depending on the draw – Tipperary in a semi-final, and still not have won the ultimate prize.

Everyone involved with the building of the new Páirc Uí Chaoimh was praying that the Cork footballers would be able to scrape past Tipperary and set up a Munster final against Kerry on July 2nd . . . now they’re daring to dream of Munster finals in both codes on back to back weekends.

The impact of one big result is seismic – and while Cork people are scrambling to adjust to the new reality of a fresh young team and even a possible Liam McCarthy, everyone else is catching up too.