Aussie Rules has a lot to offer the 35-year-old, and she will bring leadership to her new club 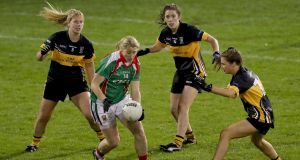 So the Cora Staunton story rumbles on, into a new sporting sphere and on to a new continent, but not before she guided her club Carnacon to a sixth All-Ireland club title on Sunday. We are familiar with the idea of a GAA player heading over to Australia, but these are unfamiliar circumstances.

When faced with young players having their heads turned by Antipodean offers, it can be difficult to put yourself in their shoes. The factors keeping them in Ireland are often romantic ones – winning at home with your friends is priceless, as is being a hero in your hometown. The arguments to go are more hard-headed – it’s a chance to be a professional athlete, it’s a challenge to your physical abilities and an opportunity to earn enough money to have a good life for you and your family.

With Staunton, in many ways, it’s the other way around. There is something undeniably romantic about her taking this challenge on at the age of 35. And rather than money being a key factor, the financial compensation available is nominal enough compared with what young male Irish players can dream of earning over there if all goes well.

It’s not without its risks. Her new team, the Greater Western Sydney Giants, finished bottom of the table last year. Watching the International Rules over the past few years, it has become clear that the Irish selection methodology centres on picking the most mobile players available to them. Physical size isn’t the critical factor as it once was.

That is just an indication of how Aussie Rules has changed. Cora might be the one truly transcendent star in the ladies’ football firmament at the moment, but going purely on speed and athleticism, the likes of her team-mate Sarah Rowe, or the Dublin duo of Noelle Healy and Nicole Owens, might seem like a more natural fit for AFLW.

But as her new assistant coach, former Cavan footballer Nicholas Walsh, told this newspaper when Staunton’s move was first announced, they’re signing her not just for footballing reasons. “We want her to drive training standards. From a skill point of view, she won’t be the best yet. But from a leadership point of view, driving standards and communication, she has a career behind her, whereas most of the other players are still in their early 20s and need to be guided on it. She has a presence, she carries herself really well and that’s what we’re bringing over.”

It’s important to understand the fast-growing allure of what she’s joined. The opening night of the inaugural women’s AFL season in February was, even in a year studded with huge achievements in women’s sport globally, an extraordinary occasion. The opening game between Carlton and Collingwood was scheduled to be played at Collingwood’s home Olympic Park Oval, but due to public interest was moved to the higher-capacity Ikon Park.

In the end, a capacity crowd of more than 24,000 people attended, with another estimated 2,000 locked out and unable to gain entry. The image of disappointed, locked-out punters was potent, and the public were hooked.

The league was shown live on two networks, and the shortness of the season, just seven games each for all eight teams, followed by a grand final, meant that appetite never waned. This season the games again come thick and fast, from round one, to be played on the weekend February 2nd-4th, right through to the grand final, on Saturday, March 24th.

Every game this season will be shown live on television, and already the AFL has announced plans to expand the number of teams in 2019 and 2020. It’s not difficult to see why Staunton would be interested in giving this a go.

She isn’t missing any club or county championship football. She will be back in Ireland in April, and as she said recently on the Second Captains podcast, she won’t make a decision on her future with Mayo until she sees the impact – positive and negative – that training as a professional and playing a high-impact, contact sport seven (or eight) weeks in a row will have on her body.

But she’s in good company. Emma Mackie is a former international cyclist for Australia who was another player drafted alongside Staunton in October. Erin Phillips, who won the player of the year in the women’s AFL last year, is one of the greatest female basketball players on the planet.

Athletes of this calibre, from a wide variety of backgrounds, are drawn to the women’s AFL because it is a highly successful, well-organised, professional women’s sports league . . . and there are not too many of them about.

Staunton has been a guiding light for her entire Gaelic football career, and you can expect a few more to follow in her footsteps in the coming years.