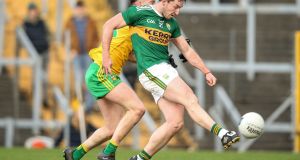 Eamon Fitzmaurice must have allowed himself a little smile on Sunday evening because he had managed to engineer pretty much the dictionary definition of a perfect league victory in Killarney against Donegal.

His Kerry team announcement was the sort of progressive statement that Kerry fans had been crying out for for 18 months or more, with a host of talented All-Ireland winning ex-minors thrust into the spotlight.

That was not without its risks, of course. Kerry have been slow starters in the league throughout Fitzmaurice’s tenure, and last year marked the first time in five attempts under him they had actually won their opening game of the league.

So he knows full well the sort of impact a couple of early defeats in the league can have on a team. Preaching patience with these young players is one thing; getting beaten by teams you’d expect to be beating (and in Kerry’s case, that’s everyone) is another thing altogether.

Take into account then the fact that the game went down to the wire, that his young team had to come back in injury time and recover from the concession of a late goal, and you have yourself a pretty decent day at the office, while appreciating at the same time that his defence was opened up far too often straight down the middle.

The concession of Donegal’s third goal by Darach O’Connor looked like being the decisive moment in the game, but two late points, from two very different sources, turned the game back in Kerry’s favour.

Sean O’Shea, the other wunderkind in the Kerry academy, hit a free from fully 45 yards out, with the game on the line in injury time – the sort of kick that ends questions about a lad’s temperament before you’ve had time to clear your throat to ask it.

But Daithí Casey, the man who kicked the winner, has come a rather more circuitous route to the green and gold, with a way still to go before we can say that he has arrived.

A piece with him on the GAA.ie website last year began with the word ‘rejection’, and contained the sentence “he never quite made the grade as an inter-county footballer”. Not that he hadn’t yet made the grade – he hadn’t done it. It was over. He was dropped off the Kerry panel in 2015, a decision Casey himself had no quarrel with, but the implication was that at 24, as he was when he took what he described as “the lovely phone call”, you don’t make a comeback. You’re on the scrapheap.

How it has happened for Sean O’Shea is how it’s supposed to happen. You play for the Kerry minors, you excel, you get the phonecall, you pay your dues on the sideline for a few months and you get your shot. At 20 or 21, you’re on the team, or you’re in the conversation, and you take it from there.

But for the entire time that Dr Crokes have been a threat at the business end of the club championship, Daithí Casey has been a mainstay. He has consistently been one of the most colourful, enjoyable players to watch every winter, with direct running, unselfish team play and a real eye for spectacular goals. But his story is all too familiar to players from successful clubs.

Oftentimes the focus will be on the struggles of Colm Cooper and, earlier, Eoin Brosnan going straight from club duty to the inter-county setup without a break. A rather less heralded side-effect of a successful club run is that it denies the players on the level below the likes of the Gooch the chance to establish themselves with their county team at all.

Daithí Casey may well have caught the eye with Crokes, but Kerry would often have four league games played before he had a chance to even go ‘inside’, as they conspiratorially say down there.

By then opinions have hardened, panels are well bedded in, and giving an unproven guy a run in the team, with the implication that you can play your way into form, just isn’t possible. Management will trust the guys they’ve seen with their own eyes for the three or four months before that.

So this spring must feel like his moment. He knows there might not be that many springs left. And to then have to watch on from the sideline as these 19- and 20-year-olds are given their head must have been galling. I can only imagine what was going through his head when he got the call to come on in the 55th minute.

We can shrug our shoulders and say ‘the league is the league’ as much as we like, but those 15 minutes might as well have been his inter-county career. And for the final moments of the game to play out the way they did – well, we can all doff our caps to that. The road less travelled can still get you to your destination.