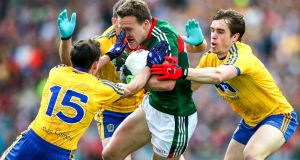 Rewatching the last 15 minutes of the Roscommon-Mayo game during the week, it quickly became clear that trying to make sense of it all was as pointless as trying to assemble a searing statistical critique of a dog chasing a kite on a beach.

It was one of those games that had so thoroughly lost the run of itself that even Kevin McStay struggled to get the chronology of events straight in his head before meeting the media, trying to piece together who did what and who missed what in those final few moments.

All we can say with certainty in the tumult was that Donie Smith’s injury-time free kick to equalise last Sunday’s All-Ireland championship quarter-final was a hugely impressive piece of football. Yet for supporters of a certain vintage it was about 30 yards too close to goal for it to really merit discussion as the greatest levelling point in the long history of the Roscommon-Mayo rivalry.

I had a couple of neighbours on the Saint Jarlath’s College, Tuam, side that lost the Hogan Cup final to St Pat’s of Maghera in a replay in Breffni Park in 1990, but my real hero from that team was a young fella by the name of Derek Duggan from Roscommon.

I remember him walking by me in a hotel in Cavan Town afterwards as I gazed up, and up, and up…he was a wonderful, dominant player at that level, a free-taking midfielder of huge ability.

Just 15 months after that, in a rise to fame even more meteoric than he could ever have expected, he stood over a free from fully 70m out against Mayo with a minute to go in Castlebar in the 1991 Connacht senior football final, and delivered quite possibly the greatest placed ball ever struck in intercounty football to force a replay.

There are a few minutes of highlights of that game on YouTube, and it is one of those rare shocks to go back and realise that your memory, rather than exaggerating it with the passage of the years, might even have sold reality short.

Unbelievably, the wind in his carefully coiffed (this was Ireland in the 1990s so even the possibility that a comb may have come within a nautical mile of it qualifies as coiffed) hair suggested a slight breeze into his face.

Liam McHale had just put Mayo in front with a couple of seconds of normal time remaining. Willie Joe Padden went for a Gay Sheerin kickout, and pushed a Roscommon player in the back. From that position in the middle of the field Duggan launched his interprovincial missile. Two kicks off the ground, one from Sheerin and one from Duggan, and Roscommon had gone the length of the field for their draw.

Duggan also kicked the winning free in the replay, but from a distance so paltry (30 yards or so) that he would no doubt be embarrassed at the mention of it. The replay is available online also, and seeing McStay, McHale, and Sheerin all featuring prominently is revealing enough in itself of the history that the two Mayo men now so expertly guiding their neighbours have to navigate.

I only mention Sheerin, and by extension his ad hominem attack on McHale and McStay from earlier this year on Shannonside FM, because I was put in mind of it when I read the statement this week from the Roscommon team and management asking their supporters not to boo Andy Moran, as had sadly been the case last Sunday.

The statement oozed class, and is a much truer reflection of the Mayo-Roscommon rivalry, with all its ferocity, than anything which coloured the earlier part of this year.

What the lie of the land is now for next Monday’s replay is hard to gauge, but this Roscommon team has already answered a few questions. Their refusal to settle for a Connacht title, which by any metric already constitutes a successful Championship for them, was refreshing. The “don’t die wondering” attitude that pervaded every inch of their play is what you expect, but not always what you get, at this level.

By comparison, Galway were so insipid, so accommodating of Kerry, that the first game of Sunday’s double bill served only as a 70-minute simulation of Championship football, one which offered a pale shadow of what the real thing looked like.

Roscommon’s ferocious start was everything that Galway fans had hoped to see in their team. Their brilliant start to the second half got them back in front, and Donie Smith’s two-point cameo nearly got them over the line.

Maybe it helped that it was Mayo. A healthy disrespect for their neighbours is pretty much the birthright of any Roscommon footballer, and certainly they weren’t intimidated by their opponents’ far greater Croke Park experience.

Mayo would do well to expect nothing less on Monday either.